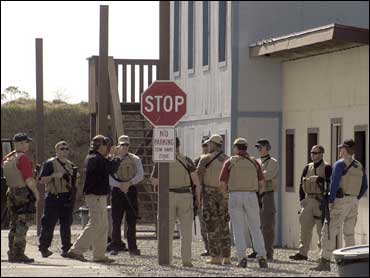 The Iraqi government Monday ordered Blackwater USA, the American security firm that protects U.S. diplomats, to stop work and leave the country after the fatal shooting of eight Iraqi civilians following a car bomb attack against a State Department convoy.

The order by the Interior Ministry, if carried out, would deal a severe blow to U.S. government operations in Iraq by stripping diplomats, engineers, reconstruction officials and others of their security protection.

But the presence of so many visible, aggressive Western security contractors has angered many Iraqis, who consider them a mercenary force that runs roughshod over people in their own country.

Secretary of State Condoleezza Rice called Prime Minister Nouri al-Maliki to to express her regret and tell him that the United States has launched an investigation into the killings, which occurred Sunday in western Baghdad.

Interior Ministry spokesman Abdul-Karim Khalaf said eight civilians were killed and 13 were wounded when contractors believed to be working for Blackwater USA opened fire on civilians in the predominantly Sunni neighborhood of Mansour.

"We have canceled the license of Blackwater and prevented them from working all over Iraqi territory. We will also refer those involved to Iraqi judicial authorities," Khalif said.

He said witness reports pointed to Backwater involvement but added that the shooting was still under investigation. One witness, Hussein Abdul-Abbas, said the explosion was followed by about 20 minutes of heavy gunfire and "everybody in the street started to flee immediately."

"This is after four years of private security contractors running around Iraq in a sort of wild west atmosphere," Scahill said. "Finally the Iraqi government has stood up and said no more of this."

U.S. officials said the motorcade was traveling through Nisoor Square on the way back to the Green Zone when a car bomb exploded, followed by volleys of small arms fire that disabled one of the vehicles but caused no American casualties.

U.S. officials refused to discuss Iraqi casualties, nor would they confirm that Blackwater personnel were involved. They also refused to explain the legal authority under which Blackwater operates in Iraq or say whether the company was complying with the order.

The incident drew attention to one of the controversial American practices of the war - the use of heavily armed private security contractors who Iraqis complain operate beyond the control of U.S. military and Iraqi law.

The events in Mansour also illustrate the challenge of trying to protect U.S. officials in a city where car bombs can explode at any time, and where gunmen blend in with the civilian population.

"The Blackwater guys are not fools. If they were gunning down people it was because they felt it was the beginning of an ambush," said Robert Young Pelton, an independent military analyst and author of the book "Licensed to Kill"

"They're famous for being very aggressive. They use their machine guns like car horns. But it's not the goal to kill people."

Iraqis have long complained about high-profile, heavily armed security vehicles careening through the streets, with guards pointing weapons at civilians and sometimes firing warning shots at anyone deemed too close. And Iraqi officials were quick to condemn the foreign guards.

Al-Maliki late Sunday condemned the shooting by a "foreign security company" and called it a "crime."

Interior Minister Jawad al-Bolani described the shooting as "a crime about which we cannot be silent."

"Everyone should understand that whoever wants good relations with Iraq should respect Iraqis," al-Bolani told Al-Arabiya television. "We are implementing the law and abide by laws and others should respect these laws and respect the sovereignty and independence of Iraqis in their country."

Defense Minister Abdul-Qadir al-Obaidi told Iraqi television that "those criminals" responsible for deaths "should be punished" that the government would demand compensation for the victims' families.

Despite threats of prosecution, government spokesman Ali al-Dabbagh told Alhurra television that contractors cannot be prosecuted by Iraqi courts because "some of them have immunity."

State Department spokesman Sean McCormack said the United States had not been notified of any Iraqi government decision to revoke Blackwater's license and declined to speculate as to how that might affect State Department activities if it happened.

"The bottom line is that the secretary wants to make sure that we do everything we possibly can to avoid the loss of innocent life," McCormack told reporters in Washington.

In April, the Defense Department said about 129,000 contractors of many nationalities were operating in Iraq - nearly as many as the entire U.S. military force before this year's troop buildup.

About 4,600 contractors are in combat roles, such as protecting supply convoys along Iraq's dangerous, bomb-laden highways.

Blackwater, a secretive North Carolina-based company run by a former Navy SEAL, is among biggest and best known security firms, with an estimated 1,000 employees in Iraq and at least $800 million in government contracts.

The company operates a fleet of helicopters in Iraq which gives it an edge in its ability to provide comprehensive security for high profile figures, including Ambassador Ryan Crocker and visiting U.S. Cabinet officials and members of Congress.

Four Blackwater employees were ambushed and killed in Fallujah in 2004 and their bodies hung from a bridge over the Euphrates River. That horrific attack shocked America and led to two major battles to regain control of the city, which had become the symbol of Sunni resistance to the U.S. military role.

Phone messages left early Monday at the company's office in North Carolina and with a spokeswoman were not immediately returned.

Since the fall of Saddam Hussein's regime in 2003, private security contractors have enabled the U.S. military to overcome some of the problems created by the Bush administration's decision to limit the number of troops on the ground.

Private companies and nongovernment organizations also turned to security companies to provide protection when security collapsed in the Iraqi capital in 2004.

But many Iraqis deeply resent the fact that contractors operate here beyond the constraints of their law.

U.S. troops here are exempt from Iraqi law but are subject to prosecution under the Uniform Code of Military Justice. More than 60 U.S. troopers in Iraq have been court-martialed on murder-related charges involving Iraqi citizens.

But an order issued by the U.S. occupation authority in 2004 - and extended this year states that contractors "shall not be subject to Iraqi laws or regulations" in the terms of their contracts or the performance of their duties.

Many of the contractors have been accused of indiscriminately firing at American and Iraqi troops, and of shooting to death an unknown number of Iraqi citizens who got too close to their heavily armed convoys, but none has faced charges or prosecution.

On Christmas Eve, an inebriated employee of Blackwater USA shot and killed a security guard for an Iraqi vice president, according to Iraqi and U.S. officials. The contractor made his way to the U.S. Embassy where Blackwater officials arranged to have him flown home to the United States, according U.S. officials who spoke only on the condition of anonymity because they were not authorized to speak to the media.

The contractor has been fired and Blackwater is cooperating with federal investigators, said company spokeswoman Anne Tyrrell.