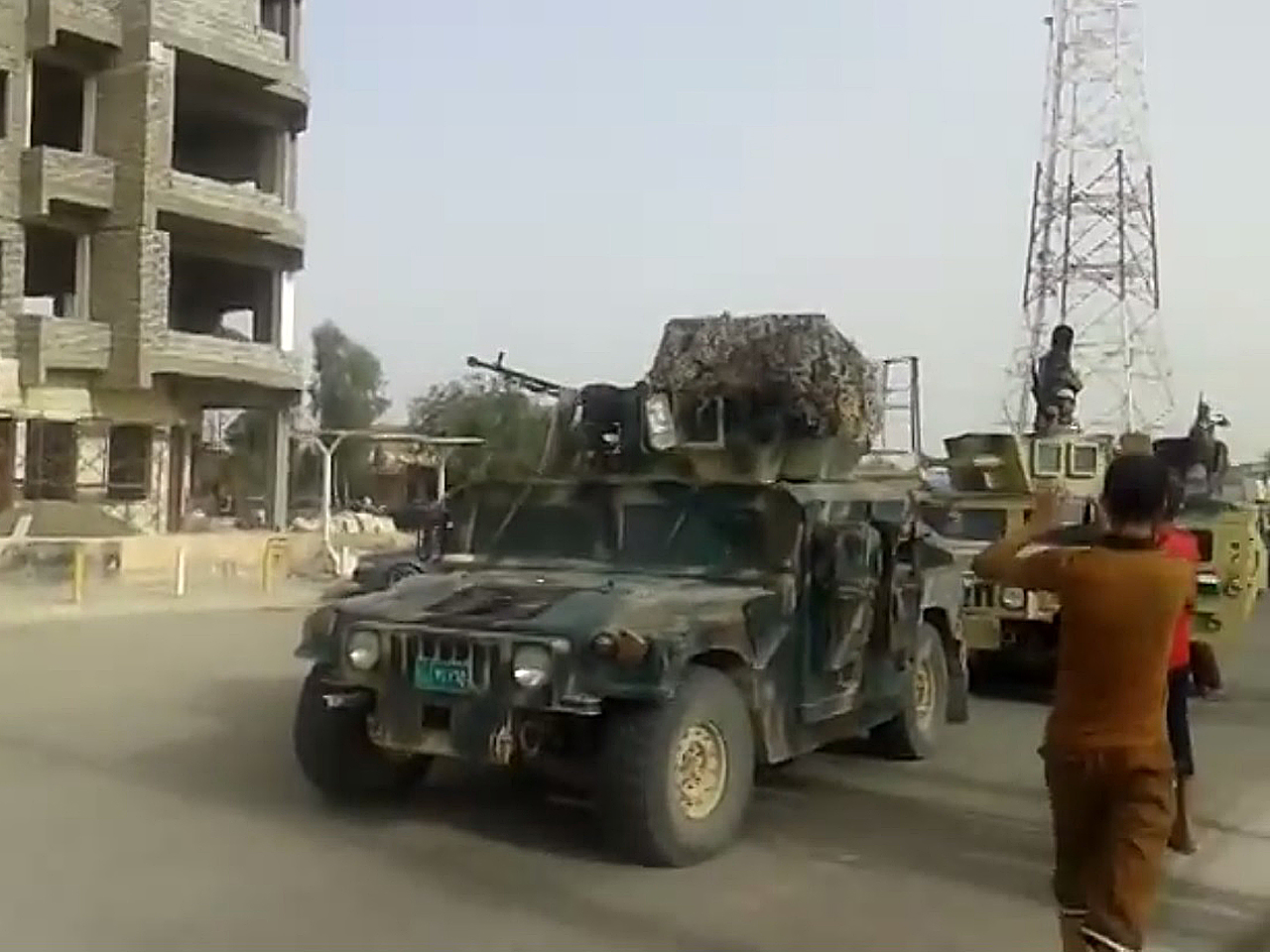 BAGHDAD -- Iraq asked the U.S. to launch airstrikes to beat back militants holding vast territories across its north, a decision Washington mulled over as insurgents pressed an assault on the country's largest oil refinery.

During a televised press conference Thursday, President Obama announced that he will be sending up to 300 military advisers to assist Iraqi security forces. He noted that the "best and most effective response" to the insurgents threatening Iraqi security will be a partnership with local Iraqi forces.

On Wednesday, Mr. Obama briefed leaders of Congress on options for quelling the insurgency by the Islamic State of Iraq and Syria, or ISIS, which launched an offensive across Iraq more than a week ago. While Mr. Obama has not fully ruled out the possibility of launching airstrikes, such action is not imminent, officials said, in part because intelligence agencies have been unable to identify clear targets on the ground.

CBS News national security correspondent David Martin reported that the U.S. is now conducting around-the-clock surveillance flights over Iraq, using both manned and unmanned aircraft including F-18s from the USS George H.W. Bush, which arrived in the Persian Gulf over the weekend.

Republicans continued to insist Wednesday that Mr. Obama bears the blame for allowing the insurgency to strengthen because of his decision to withdraw U.S. forces from Iraq in late 2011 after more than eight years of war. Washington and Baghdad failed to reach a security agreement that would have allowed American forces to stay longer.

While reluctant to launch airstrikes immediately, the U.S. is pressing Iraqi Prime Minister Nouri al-Maliki's Shiite-led government to undermine the insurgency by making overtures to Iraq's once-dominant Sunni minority, which has long complained of discrimination at the hands of his regime, and excesses by his Shiite-led security forces.

Vice President Joe Biden has offered praise for Iraq's Shiite, Sunni and Kurdish leaders in an effort to tamp down the sectarian anger roiling the country.

Bayan Jabr, who was Iraq's interior minister in 2006 at the height of the sectarian bloodshed, told CBS News correspondent Clarissa Ward on Tuesday that all "Iraqis must be united. If there is a government can do that, I think we can solve 50 percent of the problem."

Pointedly, however, Jabr said al-Maliki's government was not up to the task.

Al-Maliki, a Shiite, has consistently rejected charges of bias against the Sunnis and has in recent days stressed the notion that the threat posed by ISIS, also known as the Islamic State of Iraq and the Levant, or ISIL, is a threat to all Iraqis, regardless of their ethnic or religious affiliations. He appeared Tuesday night on television with Sunni leaders and politicians as a sign of solidarity.

"I tell all the brothers there have been negative practices by members of the military, civilians and militiamen, but that is not what we should be discussing," al-Maliki said. "Our effort should not be focused here and leave the larger objective of defeating" the militants

Still, al-Maliki's outreach remain largely rhetorical, with no concrete action to bridge differences with Sunnis and Kurds, who have been at loggerheads with the prime minister over their right to independently export oil and over territorial claims.

The United Arab Emirates, a key Western ally and important regional trading partner for Iraq, temporarily withdrew its ambassador from Iraq "for consultations." The Gulf federation's foreign ministry cited deep concern at the Iraqi government's "exclusionary and sectarian policies," according to a statement carried Wednesday night by the state news agency WAM.

The fighting has intensified what was already the world's most dire humanitarian crisis, sending more refugees from Syria and now Iraq flooding into neighboring Jordan. "CBS Evening News" anchor Scott Pelley met some of the desperate refugees this week, and asked Jordanian Brig. Gen. Saber Mahayra what would happen if Jordan closed its borders. The civilians caught in the crossfire would die in their homeland, he said quite bluntly.

Iraqi Foreign Minister Hoshyar Zebari said Wednesday that his country had formally asked the U.S. to launch airstrikes against positions of the Islamic State.

Gen. Martin Dempsey, the chairman of the U.S. Joint Chiefs of Staff, confirmed the U.S. had received a request for air power to stop the militants, but highlighted the uncertain political situation in Iraq.

"The entire enterprise is at risk as long as this political situation is in flux," told a Senate panel Wednesday. He added that some Iraqi security forces had backed down when confronted by the militants because they had "simply lost faith" in the central government in Baghdad.

The discussions over tactics came as Iraq's military said government forces had repelled repeated attacks by the militants on the country's largest oil refinery and retaken parts of the strategic city of Tal Afar, near the Syrian border.

The chief military spokesman, Lt. Gen. Qassim al-Moussawi, said Iraqi army troops had defended the refinery at Beiji, some 155 miles north of Baghdad, and 40 attackers were killed in fighting there overnight and early Wednesday.

An employee at the oil refinery reached by The Associated Press late Wednesday also said the facility remained in government hands, though one of its fuel tanks was on fire after it was apparently hit by a mortar shell fired by the militants. He spoke on condition of anonymity as he wasn't authorized to speak to journalists.

The Beiji refinery accounts for a little more than a quarter of the country's entire refining capacity - all of which goes toward domestic consumption for things like gasoline, cooking oil and fuel for power stations. Any lengthy outage at Beiji risks long lines at the gas pump and electricity shortages, adding to the chaos already facing Iraq.

There was no independent confirmation of the military's claims about the Beiji refinery or that its forces had retaken neighborhoods in Tal Afar, which Sunni fighters captured Monday. Both are in territories held by insurgents that journalists have not been able to access. Tal Afar's proximity to the Syrian border strengthens the Islamic State's plan to carve out an Islamic caliphate, or state, stretching across parts of the two countries.

The campaign by the al Qaeda-inspired Islamic State militants has raised the specter of the sectarian warfare that nearly tore the country apart in 2006 and 2007, with the popular mobilization to fight the insurgents taking an increasingly sectarian slant, particularly after Iraq's top Shiite cleric made a call to arms on Friday.

The Islamic State has vowed to march to Baghdad and the Shiite holy cities of Karbala and Najaf, home to some of the sect's most revered shrines, in the worst threat to Iraq's stability since U.S. troops left in late 2011. The militants also have tried to capture Samarra, a city north of Baghdad and home to another major Shiite shrine.

The Turkish Foreign Ministry said its diplomats were also investigating a Turkish media report that militants grabbed 60 foreign construction workers, including some 15 Turks, near the northern Iraqi oil city of Kirkuk.

Ethnic Kurds now control Kirkuk, moving to fill a vacuum after the flight of Iraqi soldiers. They too are battling the Sunni extremist militants.