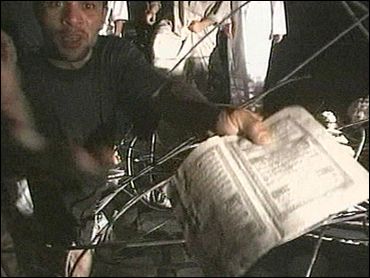 Iraqis Tuesday blamed an American missile for a deadly explosion at a mosque in Fallujah, and fired rocket-propelled grenades at two U.S. military vehicles.

A total of 12 Iraqis died — 10 in the Fallujah blast on Monday, and two others who were shot dead Tuesday by U.S. troops when their car failed to stop at a checkpoint.

Meanwhile, a regional governor said Tuesday that gunmen in Tikrit killed the head of the Saddam Hussein's tribe and wounded his son.

There were no arrests in Sunday's shooting of Abdullah Mahmoud al-Khattab and it was unclear if the assailants were pro-Saddam militants or had other revenge motives. Al-Khattab in recent weeks had publicly disavowed Saddam.