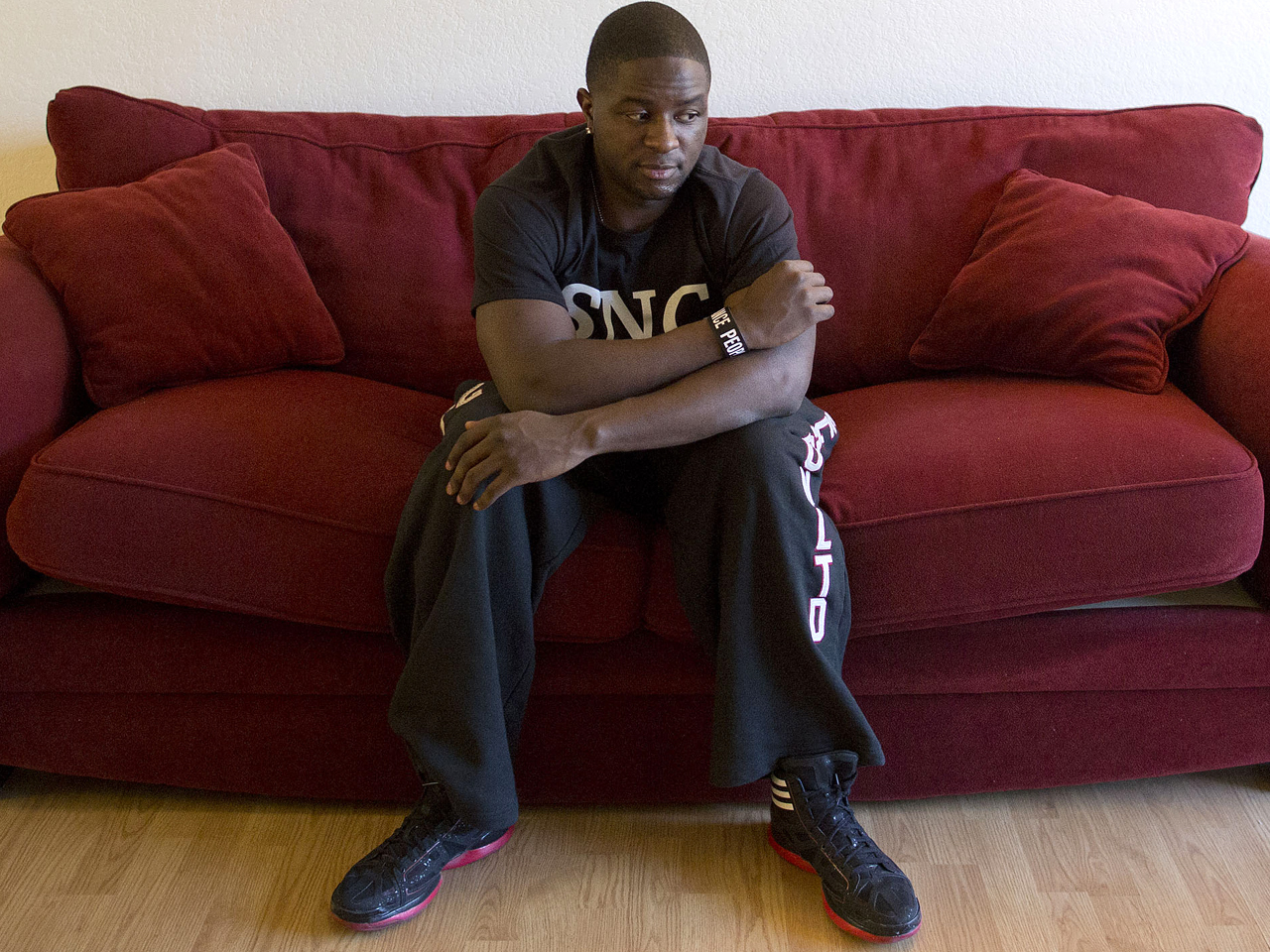 (AP) LAS VEGAS - On one of the many days Leo Dunson wanted to die, the Iraq veteran put a gun to his temple and pulled the trigger. The loaded weapon misfired. For the troubled former soldier, it was another inexplicable failure, like his divorce or inability to make friends after returning from the war.

In a Las Vegas recording studio, Dunson rapped about his life: "What's wrong with me? Got PTSD. These pills ain't working, man, I still can't think."

One in six Iraq and Afghanistan war veterans suffered from post-traumatic stress disorder in 2011, according to the Department of Veterans Affairs. Some committed suicide. Others are receiving mental health services at military hospitals. Many more are like Dunson and have refused help, according to research by the Department of Veterans Affairs' National Center for PTSD.

Dunson, who was discharged from the Army in 2008 and diagnosed by the military with PTSD, uses his music to examine his disappointment with veteran life. It is the only thing keeping him alive, he said. He refuses to attend counseling or visit his local VA hospital.

The use of music to heal war wounds is part of an emerging field of alternative treatment being embraced by military officials eager to help veterans suffering from PTSD. In Wisconsin, New Jersey, California and other states, government doctors in recent months have launched experimental music therapy programs that rely on the smoothing sounds of classical or acoustic music to help veterans get well.

But Dunson, now 26, isn't listening to serene tunes in some quiet room. His self-treatment is violent images and words, the gritty marriage of a genre born in low-income, black neighborhoods and the horrors of a foreign war.

He made five albums in four years, all focused on his training and service as an infantryman. Thousands of fans followed him on Facebook, Twitter and YouTube, where he posts his songs. He enrolled in college, hoping to pursue a career in public service. This year, Dunson moved into his first bachelor apartment.

And still, he describes himself as a man without happiness or friends.

"You are like, what the heck did I do to deserve this?" he said.

(Below, watch actor Gary Sinise talk to CBS' "60 Minutes" about how his role in "Forrest Gump" made him a hero to real-life disabled veterans.)

Disabled troops inspire Gary Sinise to give back
60 Minutes Overtime | Meeting the wounded: "They do not want your pity"
Video | Injured veteran: "I have a great life"

In his music, Dunson recalls pressing a gun against an enemy's mouth, becoming an alcoholic and hitting his wife. He laments learning how to kill when he was only 20 years old.

"I'm back and forth in my head and I don't know what's wrong," he raps in "PTSD." "At nights I shake. I feel like a stranger is in my home. Me and my wife can't get along."

On a different record, he confessed: "My mind ain't been put to rest. And they wonder why all I talk about is these bullets and how a trigger of a gun I want to pull it and how badly my military training I want to misuse it."

In yet another song, Dunson expressed the words he would never tell his family: "Honestly, over there, I wish I had died."

He was 18 when he enlisted, eager to make a difference and serve his country after the terrorist attacks of Sept. 11. He grew up in the Army, meeting the mother of his only child near his base in Alaska.

In Iraq, it was difficult to sleep. Dunson said he worried he would wake up in an insurgent's makeshift torture chamber.

There were plenty of signs he was drifting far from the good-natured child his family says he once was. One day, he and his fellow soldiers pretended to arrest an Iraqi boy. As the child cried, the soldiers taunted him, according to video Dunson took that day. Dunson said it was a joke.

His assault rifle became his life, he said. He held it while he ate and slept and fired toward crowds of Iraqis when he felt threatened. One day, he took his gun and put it to his friend's head. They laughed and someone took a photo.

Through it all, Dunson worried about the man he was becoming. When his sergeant urged him to kill anything in sight one day, he balked. "This is crazy," he recalled thinking.

The life he had left was gone. After serving in Iraq, Dunson came home to a tense relationship with his wife. She denied cheating on him, but later took their daughter and moved in with another soldier.

Dunson plotted to kill them, convinced he could easily dispose of their bodies in the Alaskan wilderness. In less than a year, he was arrested four times for various domestic abuse charges, he said.

"I felt angry and out of control, like I don't know what I might do angry," he said.

He moved to Las Vegas and stayed on his cousin's couch. Though he had once been close with his family, Dunson stopped visiting or telephoning his other relatives, certain they were disappointed in him.

"I feel like they are saying, 'Oh, he lost his wife, he is crazy. Oh, he went to war.' Not saying it, but in their heads, they are saying it the whole time, like I don't fit in," he said.The faces of the men he killed — the husbands, fathers and brothers — haunted him. Even after his ex-wife moved their daughter to Las Vegas to be near him, her happy Facebook musings about holiday celebrations and weekend activities upset him. On several occasions, he climbed to the roof of an empty condominium tower and stared at the concrete below, willing himself to jump.

LaTonya Williams, 30, said the changes in her once easygoing cousin are stark.

"He was never violent before," she said. "He was the center of my family. Everyone loved him. He had the best jokes and the best sense of humor ... and when he came back he was a completely different person. He's not the Leo that everybody knew him to be."

Dunson has a youthful face and a muscular body. When he speaks, he appears friendly and well-mannered, a sharp contrast to the rage in his music. He works as a security guard at night and then goes directly to class most mornings. On the weekends, he visits with his daughter.

Through his music, Dunson explored his desire to kill and die. He found a producer and director to make his albums and videos more professional. Soon, he was performing concerts at bases and veterans events.

"Music has always been my therapy," he said.

Concetta Tomaino, executive director of the Institute for Music and Neurologic Function in New York, has used music to treat victims of dementia, trauma and gang violence. She said patients respond to music from their youth or happier days. Rap might help PTSD victims process the violence they experienced in conflict, she said.

"If a person has had a traumatic experience and can vent that in music, that can be very positive," she said. "Anybody who deals with people in some trauma will tell you the most damaging thing to do is suppress it."

Dunson said he hopes his music helps other veterans confront their PTSD, even as he struggles with it himself.

"I lost it all, not just my wife and daughter, but my mind," he said. "If I had died over there, I would have got a 21-gun salute, everybody would praise me like I was a king. What do I get now?"