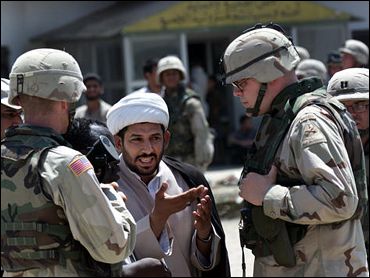 One U.S. soldier was killed and three were injured in downtown Baghdad Monday when an attacker dropped a grenade from an overpass onto a convoy, the military said.

The death brought to 49 the number of soldiers killed in a guerrilla war since May 1, when President Bush declared an end to major combat in Iraq. In all, 163 U.S. soldiers have died in action in Iraq, 16 more than in the 1991 Gulf War.

It took the military hours to confirm the attack. Witnesses had given reporters varying accounts earlier in the day, saying at least three U.S. soldiers were injured or killed.

"I saw at least two injured soldiers, then I saw the third one who was thrown out of the car. They (others soldiers) pulled him under the car," said witness Alim Naati.

Shihab Ahmed, who owns a nearby flower shop, said he was told all the soldiers died. The witnesses said the victims were in canvas-top Humvee moving along Palestine Street in central Baghdad.

In a separate incident, a U.S. soldier was killed in a vehicle accident near the southern city of Nasiriyah. Another soldier was injured in the accident, reported by U.S. Central Command. The military provided no other details.

North of Baghdad, on the road from Baqouba to Tikrit, insurgents floated a bomb down the river on a palm log and detonated it under a bridge the military had been repairing.

It was believed to have been the first such attack by insurgents on a bridge. The structures are vital to a country with two major rivers, the Tigris and the Euphrates. The military closed a pontoon crossing down river that had been open for civilian traffic during the repairs.

"Because of this damage we've got to shut it to all the civilian traffic effective today," Lt. Col. Bill Adamson, a 4th Infantry Division commander, said.

The bridge was a major link over the Diala River, a Tigris tributary, carrying traffic between the restive cities of Baquoba and Tikrit, both hotbeds of resistance in the so-called "Sunni Triangle." The region, stretching north and west from Baghdad is a major center of support for Saddam.