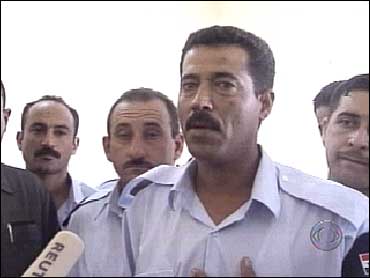 Iraqi police gave U.S. troops in Fallujah an ultimatum on Thursday, threatening to abandon their posts unless the Americans clear out of town, reports CBS News Correspondent David Hawkins.

"We demand the American forces leave in 48 hours," said one Fallujah officer. "And take the barbed wire with you. It's a barrier between us and our people."

An anti-American demonstration took place following an overnight rocket attack on the Fallujah police station, carried out by Iraqi insurgents.

Iraqis are now saying the presence of American soldiers, which has spurred the now constant string of stealth strikes by Saddam loyalists, is putting their lives in danger.

At least two more U.S. soldiers were killed today in Iraqi ambushes. The first attack occurred in the town of Mahmudiyah, approximately 20 miles south of Baghdad. The second took place in Baqouba, 45 miles to the north.