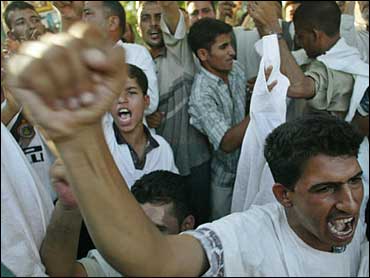 While a violent insurgency killed yet another American soldier Saturday, Iraq's American-backed administration failed in its first week to choose a president, abandoning that mission in favor of a weak, three-man rotating leadership.

The top U.S. official in Iraq — who hand-picked the Governing Council — returned to Washington.

The council, agonizingly shepherded into existence by L. Paul Bremer, the U.S. administrator for Iraq, was announced last Sunday, saying its first order of business was the election of a president. When that did not happen after six days in session, officials of the Iraqi government told The Associated Press on Saturday that it would share the leadership job among at least three of 25 members.

Meanwhile, thousands of Shiites marched on the U.S. military and political headquarters in a former presidential palace in Baghdad. They were protesting because they said the U.S. military briefly surrounded the house of a Shiite cleric in the holy city of Najaf after he issued an anti-American sermon during Friday prayers.

The military said it was checking whether they had taken any action against the cleric, Muqtada al-Sadr, who called the governing council an assembly of "nonbelievers" and said he would form a rival political body.

Bremer had given Shiites — who were harshly oppressed by Saddam's Sunni-dominated regime — a slim majority on the governing council. But most of the Shiite members are secular figures or moderate clerics.

The U.S. administrator left Baghdad unannounced Friday and was expected to be in Washington for about a week. His Baghdad office said the 61-year-old former diplomat and counterterrorism expert would visit the U.S. capital for consultations. He also was scheduled to appear on three weekly U.S. television interview programs Sunday.

In Baghdad this week, Bremer nearly disappeared from public view after the council was announced, an apparent bid to diminish the widely held perception among Iraqis and the rest of the world that the new Governing Council was an American puppet.

Bremer's office did not respond to requests for an assessment of the council's first week in business, but a spokesman for one council member issued a short statement.

"There is a general agreement that the presidency should be on a rotational basis because each political group in the council should shoulder an equal role and equal responsibility," said Ali Abdul-Amir, spokesman for council-member Iyad Allawi of the Iraqi National Accord.

The three likely members of the rotating presidency will be a leading Shiite politician, a highly respected Shiite cleric and former Foreign Minister Adnan Pachachi, a council source told the AP, speaking on condition of anonymity.

The 80-year-old Pachachi, a Sunni Muslim, served in the government that Saddam's Baath Party ousted in a 1968 coup. He will be joined in the leadership troika by 78-year-old Mohammed Bahr al-Uloum, a cleric who returned from London after the 1991 Gulf War. He served as the council president during its first week in session.

The leadership group will be rounded out by Abdel-Aziz al-Hakim, who is in his early 50s, head of the Supreme Council for the Islamic Revolution in Iraq and also a Shiite cleric. He opposes the U.S. presence in the country but has close ties to U.S.-backed Kurds and Ahmad Chalabi's Iraqi National Congress.

Chalabi, who left Iraq as a teenager, has been touted in some U.S. government circles as Iraq's likely first post-Saddam leader. But many in Iraq are distrustful of his close ties to Washington.

A Western diplomat who works closely with the council said the decision to establish a rotating presidency did not reflect political divisions among members of the governing body, whom, he said, were cooperating despite their religious and ethnic differences. The diplomat, speaking on condition of anonymity, said the move to a joint presidency meant the job would be largely symbolic.

The move clearly reflected an unwillingness among council members to vest too much authority in any one of them.

Violence persisted, with a U.S. soldier killed early Saturday while guarding a bank in west Baghdad. The soldier's death brought to 149 the number of U.S. personnel killed in combat since the March 20 start of the war — two more than the 1991 Gulf War total for U.S. deaths in combat.

"We learn from every engagement in order to learn to beat the enemy. Clearly, we are fighting and we expect that this will continue for a while," Sanchez told reporters.

He said U.S. forces would set up a 6,500-man strong Iraqi civilian defense force with members patrolling with U.S. forces. He said the Iraqis would be armed and will work with the Americans as translators reduce misunderstandings between the American forces and the Iraqi people.