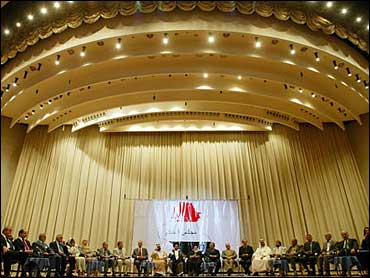 Iraq's first postwar national political body said Tuesday it would set up a special court system to try former members of Saddam Hussein's regime and others accused of crimes against humanity.

Entifadh Qanbar, spokesman for one of the former opposition groups represented on the council, said bringing members of the former regime to justice was among the most pressing issues facing the newly established council.

A Human Rights Watch official challenged the plan, saying it would put former victims of Saddam and his regime in the position of judging their tormentors and might not result in justice.

Hania Mufti, London director of Human Rights Watch, also said the Iraqi court system was ill-equipped to deal with the task of trying such crimes and said international legal experts should be part of the process.

"Saddam's victims should not be overseers of the justice system. It should be independent of both the former regime and its victims," Mufti said.

Qanbar said the council also sent a request to former New York police commissioner Bernard Kerik, who is in charge of rebuilding Iraqi police, and U.S. ground forces commander Gen. Ricardo Sanchez, asking that the council be briefed routinely on the security situation in the country.

The Governing Council, selected with major imput by L. Paul Bremer, the American administrator of Iraq, was announced on Sunday and has been in daily session since then.

The Council will begin filling Cabinet positions next week in a gradual process, said Fawzi Hariri, a spokesman the Kurdistan Democratic Party. He rejected criticism that the council lacked independence from Bremer.

"The council will have major authority. It will be the real ruler of Iraq," Hariri said. "Bremer's role as a civil administrator of Iraq will be consulting with the governing council in some of the matters, especially the security matters since they (the Americans) are the main military force in Iraq."

The governing council has the power to name ministers and approve the 2004 budget. The 25-member body is comprised of prominent Iraqis from all walks of political and religious life and will have some political muscle even though the Americans have made clear Bremer has ultimate control.

Hariri said governing council will send three or four members to New York as part of a U.N. delegation, including one of three women members and at least one Kurdish representative. He said details of the delegation were being decided in meetings Tuesday.

There were already challenges to the counil's authority from at home and abroad.

In Kazimyah, a predominantly Shiite neighborhood of north Baghdad, thousands turned out Tuesday for the funeral of Ahmed al-Waeli, a prominent cleric who died in Baghdad of natural causes less than a week after his return from exile. Many at the funeral used the occasion to criticize the council, saying it was not elected and illegitimate.

Followers of al-Hawza al-Ilmiyah, Iraq's highest Shiite Muslim seat of learning based in the southern city of Najaf, handed out leaflets in Baghdad on Monday calling on followers to protest, and several Shiite mosques in the capital made similar pleas at Monday evening prayers.

Also Tuesday, the city council of Fallujah said it rejected the council's authority because it was selected along ethnic lines. Shiite Muslims hold 13 of the governing council's 25 seats, the first time the country's Shiite majority has held the reins of national political power. Fallujah lies within an area known as the "Sunni Triangle," where support for Saddam still runs strong.

Criticism of the council and Iraq's U.S. and British occupiers also came from the Arab League. Secretary-General Amr Moussa issued a statement Sunday saying that had the new council been elected, "it would have gained much power and credibility."

U.S. officials say elections are not yet practical in Iraq. The council is meant to be the forerunner of a constitutional assembly, which will pave the way for elections sometime in late 2004 or early 2005.

Bremer on Tuesday promised that U.S. and British troops would not be in the country "any longer than necessary," saying the length of the coalition stay depended on how quickly the Governing Council could write a constitution and get a democratic government in place.

Bremer said that with the establishment of the Governing Council on Sunday — the first national postwar Iraqi political body — writing a constitution and setting up a "sovereign government" was an "Iraqi affair."

"Then our job, the coalition's job, will be done. We have no desire to stay any longer than necessary," Bremer said.

The Governing Council is meant to establish a 200-250 member constitutional assembly that is planned to start in September drawing up a draft constitution, a process expected to take nine months to a year. Free elections to pick a government are expected to follow.

"The timing of how long the coalition stays here is now in the hands of the Iraqi people," Bremer said.

The council formed after several setbacks in U.S. attempts to turn power over to Iraqis. First, retired Gen. Jay Garner said the interim council would be running by May, then by June. That deadline was moved back.

Under initial plans, the council was to be mainly an advisory board. But public anger at that prospect forced changes in the plan.