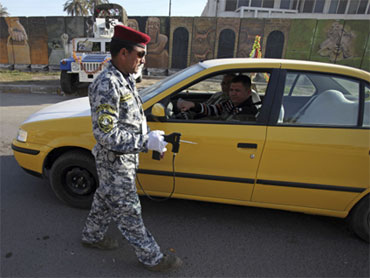 Iraqi security forces locked down parts of Baghdad Tuesday in search for possible car bombs, military officials said, in a sign of heightened tension ahead of crucial March elections.

While there are hundreds of checkpoints throughout Baghdad, Tuesday's large-scale lockdowns and searches of neighborhoods have become rare since the height of the insurgency in 2006 and 2007.

The security operation comes as Iraq prepares for nationwide parliamentary elections in March.

Officials have warned that insurgents seeking to disrupt the vote could try to increase attacks as the election nears. The stakes are especially high for the prime minister's Rule of Law coalition, which is campaigning on its ability to protect Iraqi citizens.

Defense ministry spokesman Lt. Gen. Mohammed al-Askari described the lockdown and searches as a pre-emptive operation against would-be bombers that required an element of surprise to succeed.

"The security forces had tips about places (where people were making) car and vest bombs."

Around midday, an Iraqi army official and a police official said the ban on vehicles had been lifted in several neighborhoods. The police official said about half of the stores in markets at the city center remained closed and that search operations were continuing in the north of the city.

They spoke on condition of anonymity because they were not authorized to speak to the press.

Even without increased security, it can already take hours to negotiate the city's snarled traffic jams - partly caused by blocked roads and interminable checkpoints.

The capital has been rocked by a number of high-profile bombings in recent months, mostly targeting government institutions in central Baghdad. Hundreds were killed in those bombings.

Analysts expect violence to increase to in the run-up to the March 7 polls. One election worker has already been killed and another kidnapped, and on Saturday gunmen wounded an employee of a government committee charged with keeping supporters of the Saddam Hussein regime out of politics.

The committee has recommended banning 14 political parties and one individual from running.

"Members of those entities were personnel of the former regime's repressive security apparatus, or Mukhabarat (secret police) officers, and some of them were collaborators with the former regime," said Ali al-Lami, the head of the committee.

A prominent Sunni politician, Saleh al-Mutlaq, is among those the committee has recommended should be banned. His potential disbarment raised fears that Sunnis might boycott the polls again, as they did in a January 2005 election. That boycott was followed by a surge in insurgent attacks.