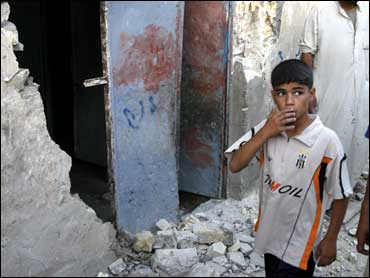 National Security Adviser Mouwaffak al-Rubaie, reading from a government statement, said the Iraqis believed that "in the near future" the need for U.S. and other coalition forces "will decrease."

"The aim of the Iraqi government is to achieve self-reliance in security as soon as possible, but we still need the support of coalition forces to reach this point," cautioned al-Rubaie, who in the past has often given rosy pictures of Iraq's capabilities.

Gen. David Petraeus and U.S. Ambassador to Iraq Ryan Crocker began testimony before U.S. Congress on Monday, with Petraeus calling for a gradual reduction - but still significant number - of U.S. troops in Iraq. He said he has recommended that in December an Army brigade - numbering 3,500 to 4,000 soldiers - be withdrawn, and that between December and next July four additional Army brigades plus two Marine battalions leave Iraq without being replaced.

That would still leave a U.S. force of approximately 130,000 - about the same number that were in Iraq before U.S. President George W. Bush announced his troop buildup in January.

Al-Rubaie said Tuesday that Petraeus' report showed a "transparency in evaluating the situation" and that the U.S.-led coalition is "enabling us to be successful."

Monday's Capitol Hill testimony was frequently interrupted by anti-war protesters, and Petraeus heard strong rebuttals from some U.S. lawmakers who oppose America's continued involvement in the 4 1/2 year war that has claimed at least 3,772 U.S. lives.

(AP Photo/Sabah Arar)
Referring to the clamor, al-Rubaie (seen at left) said: "We understand... the impatience and disappointment of our coalition supporters who expected more (progress) sooner."

"We Iraqis are of course impatient, and wish the progress were more rapid," he said.

Meanwhile, ordinary Iraqis said Tuesday that Petraeus and Crocker's testimony in Washington meant little for their daily struggles in Baghdad.

"I was listening to the report last night, and I think it's a forgery lacking credibility. They (the Americans) care for their interests only," said a Baghdad resident who gave only his nickname, Abu Ali, out of fear of reprisals.

"It might be propaganda ahead of U.S. elections," he added. He said he favors a quicker American military withdrawal than Petraeus has recommended.