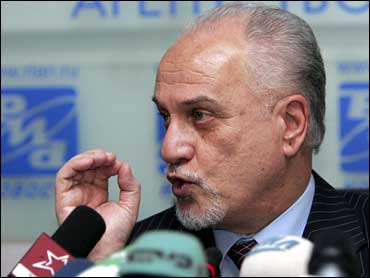 
Energy companies that make deals with the Kurdish government may strike oil, but they'll have trouble selling it, warns Iraq's Oil Minister.

"Iraq's neighbors - Syria, Iran and even Turkey - have said they will only allow oil over the border to market that is being exported by the federal government," Dr. Hussein al Shahristani told CBS News.

This is the latest salvo in an escalating fight between Iraq's national government and Kurdish regional authorities. At issue is how Iraq's vast oil wealth will be shared out, and who will control the commercial terms under which foreign companies operate.

A comprehensive Oil and Gas law should spell out the rules - but it has never been passed by Iraq's Parliament. For months, it has been stalled by political wrangling and foot-dragging.

Meanwhile, some companies have lost patience and negotiated deals directly with the Kurdish Regional Government. It controls a huge semi-autonomous area in northern Iraq, and passed its own oil and gas law unilaterally in August.

Texas-based Hunt Oil Company announced earlier this month it had signed such an agreement. It joins companies from Canada, Turkey, the Persian Gulf and Norway which have already begun exploring for oil and gas in Kurdistan.

Iraqi politicians accuse the Kurdish Regional Government of obstructing the national law so it is free to negotiate at the regional level. Many suspect that these deals - signed before the national law is passed - will funnel a larger proportion of oil profits back to the Kurds.

"That poses a threat to the sovereignty of Iraq," said al Shahristani. "If people don't believe the Kurds are sharing their oil wealth fairly, then other oil producing regions will not want to share theirs either."

"But," he adds, "the deals the Kurds have done so far have no legal standing. They could be annulled and the companies involved will suffer the consequences."

"Of course that is not true," said Kurdish Regional Government spokesman, Khalid Saleh. "How can any serious government official think they are in a position to punish any company working in Iraq legally to contribute to the country's revenue for the benefit of the whole country?"

The Kurds deny they are impeding the national oil law's passage in Iraq's Parliament.

"In fact we are the engine moving it along," said Saleh, who estimated that a national law may eventually be passed in October.

In the meantime, the Kurdish Regional Government is courting oil business on its own terms, and has even published its Oil and Gas Law along with a sample Production-Sharing Agreement, in English, on its Web site.