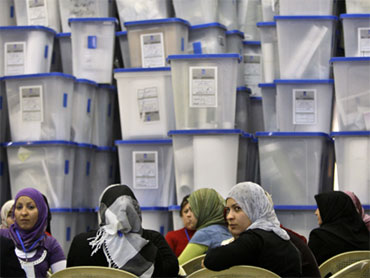 The Iraqi prime minister's coalition and its main secular rival both claimed to be ahead in the vote count Monday, a day after historic parliamentary elections that the top U.S. commander said would let all but 50,000 American troops come home by the end of summer.

Sunday's election, which took place against a backdrop of violence in Baghdad, marked a turning point for the country's nascent democracy. The winner will help determine whether Iraq can resolve its sectarian divisions and preserve the nation's fragile security as U.S. troops leave.

Initial results for some provinces, as well as for Baghdad - an area essential to determining any winner - were to be announced Tuesday.

CBS News correspondent Elizabeth Palmer reports that Sunday's parliamentary election was a huge logistics exercise, with 10,000 polling centers across the country and more than 2,000 candidates.

The election was only the country's second for a full parliamentary term, and it attracted 62 percent of about 19 million eligible voters, according to the nation's election commission. The last such election, in December 2005, attracted roughly 76 percent of eligible voters.

Officials attributed the lower turnout to a combination of voter intimidation, more stringent ID requirements at the polls and a drop in voter excitement. A spate of attacks on election day - some directly targeting voters and polling stations - killed 36 people.

Gen. Ray Odierno, the top U.S. commander in Iraq, called the election a milestone and said that every sign suggests Iraq will be able to peacefully form a new government in the coming months, and U.S. combat troops can head home by the end of August.

Most of the roughly 96,000 troops in Iraq will remain here through May, when the military will begin scaling down to 50,000 noncombat troops by the Obama administration's self-imposed deadline at the start of September, Odierno said.

The timetable calls for all troops to be out by the end of 2011.

"Unless there's a catastrophic event, we don't see that changing," Odierno said.

With ballots still being counted, officials from both the State of Law coalition led by Prime Minister Nouri al-Maliki and the rival Iraqiya claimed to be leading. Iraqiya is a secular alliance led by Shiite former Prime Minister Ayad Allawi, but it also contains many Sunnis.

Abbas al-Bayati from al-Maliki's coalition said early information from the coalition's representatives showed the group did well in Baghdad and in the Shiite south, which includes Iraq's second-largest city, Basra.

"We think that the State of Law coalition will shoulder the task of forming the next government," he said.

But Iraqiya conceded no ground, saying the group had done well in areas such as Anbar, Diyala and Ninewah, which is home to Iraq's third-largest city. Iraqiya appeared to cash in on the votes of Sunnis who see Allawi as a Shiite who can represent their interests but is not beholden to neighboring Iran.

"We expect that we are first in Iraq," said Raheem al-Shimmari, an Iraqiya official.

An official from a competing Shiite party opposing al-Maliki said the State of Law coalition appeared to be in the lead. The official spoke on the condition that he not be named because of the sensitivity of the issue.

Officials from various political parties were present during the regional vote counts and acknowledged that al-Maliki appeared to have done the best. All of them spoke on condition of anonymity because the vote count was a delicate matter.

A win for al-Maliki or secular rival Iraqiya could indicate Iraqis' frustration with religious parties who have been the dominant political force since the U.S.-led invasion in 2003.

Religious parties have angered many voters in the Shiite south for their perceived inability to improve government services such as electricity, and many Iraqis are generally weary of the sectarian tensions that have persisted for so long.

Al-Maliki, the compromise choice for the prime minister's office in 2006, used to be aligned with the Shiite parties but in recent years has tried to establish himself as a nonsectarian nationalist who was able to provide security.

But no one party appeared to have an overwhelming majority, meaning that the winner will have to build a coalition government. Finding political partners may be a tough task for al-Maliki, a man who has created many political enemies during his nearly four years in office.

Joost Hiltermann of the International Crisis Group, said if al-Maliki were to come out ahead, he would be hard-pressed to build a coalition.

"Al-Maliki still needs to build up a large coalition, which will take a long time. He will have to make a lot of deals," he said. "But I doubt that as a result he will remain as prime minister. Most of the people he has to deal with don't want him."

Adding to the multiple number of outcomes is the fact that individual candidates on lists can easily leave their coalitions - some cobbled together before the elections with little deep political conviction - to join another group, Hiltermann said.

Key to any political coalition will be Kurdish support, Hiltermann said. Because the Kurds are generally unified and will probably have a significant number of seats, they can help determine who runs the country when they throw their weight behind a candidate.