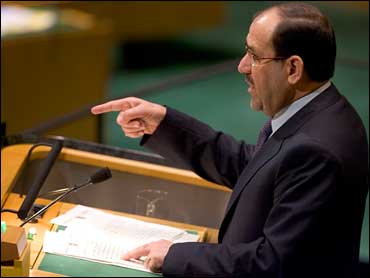 Iraqi Prime Minister Nouri al-Maliki warned the U.N. General Assembly Wednesday that the continued flow of weapons, suicide bombers and terrorism funding into his country would result in "disastrous consequences" for the region and the world.

Al-Maliki, who met with President Bush Tuesday, urged the international community and countries in the region to support Iraq's national reconciliation process to rid terrorism from the country and bring peace to the region.

"National reconciliation is stronger than the weapons of terrorism," he said. "Today we feel optimistic that countries of the region realize the danger of the terrorist attacks against Iraq, that it is not in their interest for Iraq to be weak."

Al-Maliki said his country had reduced sectarian killings and brought stability to some regions, such as Anbar province in the west. He said thousands of displaced families have been able to return to their homes.

He said Iraq also has hundreds of political parties active within 20 political alliances; more than 6,000 civil organizations; hundreds of newspapers and magazines and 40 local and satellite TV stations. But terrorists are targeting this "new Iraq," he said.

"Terrorism kills civilians, journalists, actors, thinkers and professionals. It attacks universities, marketplaces and libraries. It blows up mosques and churches and destroys the infrastructure of state institutions," al-Maliki said.

Al-Maliki said he has warned the countries in the region that "the continued overflow of weapons, money, suicide bombers and the spreading of 'fatwas' inciting hatred and murder will only result in disastrous consequences for peoples of the region and the world."

Washington has long accused Iran of aiding Shiite Muslim militias in Iraq that it says have killed hundreds of American troops with powerful bombs known as explosively formed penetrators, or EFPs. The U.S. has also accused Iran of training fighters and sending them into Iraq to attack American and Iraqi troops.

Iran disputes those allegations, saying it does not meddle inside Iraq.

"They even oppose the constitution, National Assembly and the government established by the vote of the people, while they do not even have the courage to declare their defeat and exit Iraq," he said.

The U.S. delegation walked out of the General Assembly chamber when Ahmadinejad went to the podium, leaving only a low-ranking note-taker to listen to his speech, which also indirectly accused the U.S. and Israel of human rights violations. Gonzalo Gallegos, a State Department spokesman, said the U.S. wanted "to send him a powerful message."

In his meeting with al-Maliki on Tuesday, Bush pressed the Iraqi leader to make progress on measures deemed critical to the reconciliation process. Much-delayed action on such initiatives as a national oil law have stalled in the Iraqi parliament amid factional bickering and, in some cases, defections.

"Some politicians may be trying to block the law to gain special advantage," Bush said. "And these parties have got to understand that it's in the interests of Iraq to get good law passed."

In his speech to the General Assembly, al-Maliki only briefly noted the proposed oil law, saying his government has completed the work on it and was awaiting its approval by the Iraqi parliament.

He said national reconciliation was not the responsibility of his government alone.

"We look at national reconciliation as a life boat, a perpetual peace project and a safe harbor for the political process and the democratic experience," he said. "It is a group responsibility held by political powers, intellectual leaders, religious leaders, the educated, civil organizations and all the active powers in the Iraqi arena."

Following al-Maliki's speech, Cuba's foreign minister launched a blistering attack against Bush, saying the president "came into office through fraud and deceit" and has "no moral authority or credibility to judge anyone."

Roque's comments were in response to Bush's speech Tuesday in which he envisioned a Cuba without ailing leader Fidel Castro.

"In Cuba, the long rule of a cruel dictator is nearing its end," Bush said. "The Cuban people are ready for their freedom. And as that nation enters a period of transition, the United Nations must insist on free speech, free assembly and, ultimately, free and competitive elections."