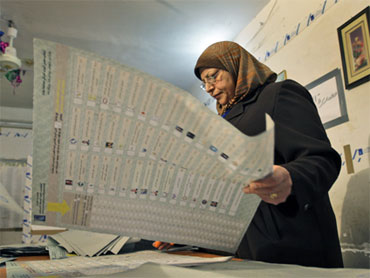 Early estimates from a range of Iraqi parties on Monday predicted a coalition led by Iraqi Prime Minister Nouri al-Maliki would take the lead in the parliamentary election, though official results were not expected for a few days.

A win by al-Maliki could signal Iraqis' rejection of the religious parties that have dominated the country since the U.S.-led invasion in 2003. The prime minister has been trying to distance himself from his party's religious roots and portray himself as more of a nationalist.

CBS News correspondent Elizabeth Palmer reports that Sunday's parliamentary election was a huge logistics exercise, with 10,000 polling centers across the country, a possible 10 million voters, and more than 2,000 candidates.

Sunday's voting was the latest test of Iraq's fragile democracy and will determine whether the country can overcome the deep sectarian divides that have plagued it for the past seven years.

Voters in Baghdad remained weary of corruption and tired of political excuses, but seemed relatively upbeat following an election that went far smoother than most had even hoped for.

Officials attributed the drop to a combination of voter intimidation, more stringent ID requirements at the polls and a drop in voter excitement. A spate of attacks on election day - some directly on voters and polling stations - killed 36 people.

Iraqis are fed up with religious-based violence and are desperate for a government that can deliver on things like clean water, schools and jobs.

"We need change," one Baghdad voter told Palmer. "We need new faces to get anything done."

The election commission said at a news conference that initial results for some provinces as well as some districts in Baghdad - an area key to determining any winner - will be announced Tuesday. But full results are not expected for a few more days.

But officials of the various parties were present during regional vote counts after the polls closed Sunday, giving them a sense of where the race is heading.

The election results will also usher in a new government as U.S. forces prepare to leave.

Abbas al-Bayati from al-Maliki's State of Law coalition said early information from the coalition's representatives showed the list did well in Baghdad - where 68 of the parliament's 325 seats will come from - and in the Shiite south.

Regional officials in other parties who observed local vote counts also acknowledged that al-Maliki had done the best, although they spoke anonymously because official results had not yet been announced.

An official from a competing Shiite party opposing al-Maliki said the State of Law coalition appeared to be in the lead. He asked not to be named because of the sensitivity of the issue.

Allawi is fierce critic of al-Maliki who has said the government needs to do more to bring about reconciliation between the country's warring sects. His coalition included a number of high-profile Sunni candidates as well.

But even officials from al-Maliki's State of Law acknowledged that they did not have enough seats to form an outright majority, meaning they would have to work with other coalitions to form a government, a tough task considering al-Maliki's fractured relations with opposing political parties.

By all accounts, a small number of seats are expected to separate the first and second place blocs, which could further complicate and prolong the political wrangling required to form a government.

Many in the capital told CBS News they hoped that the power sharing that will necessarily come when the votes are counted won't lead to government paralysis - or worse, more fighting and bombs.

U.S. Ambassador to Iraq Christopher Hill, speaking on CBS' "The Early Show" Monday, said it would likely take months for the various political coalitions seeking power to work out a power-sharing deal and form a new government once the votes were counted. He said Iraq's recognized that, but were ready for change.

The election "will help set the tone for Iraq for many years to come," said Hill. "The Iraqi people want to see some progress."