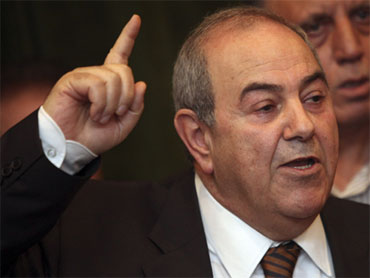 Former Prime Minister Ayad Allawi said Saturday his secular political alliance is open to bringing any of his rivals into a governing coalition that can restore Iraq's place in the Arab and Muslim world.

Allawi's Iraqiya bloc came out the top vote-getter in March 7 parliamentary elections, according to full results released Friday, edging out his chief rival, Prime Minister Nouri al-Maliki, who refused to accept the results and said he will challenge them.

"The Iraqi people have blessed the Iraqiya bloc by choosing it," Allawi told a packed news conference Saturday at his headquarters. "We are open to all powers starting with the State of Law bloc of brother Prime Minister Nouri al-Maliki."

Allawi's Iraqiya coalition won 91 seats to 89 for al-Maliki's State of Law bloc, riding a wave of support from Sunnis frustrated with the current regime that they say has incited sectarian tensions and is too closely aligned with neighboring Iran.

If Allawi's coalition remains on top, it will get the first opportunity to form a parliamentary majority and Iraq's next government, and complete his emergence from what once appeared to be the political graveyard.

But the results do not automatically mean that he will become the next prime minister, and the slim margin sets the stage for months of political wrangling.

Allawi seemed to waste no time, saying that he had already appointed someone from his coalition to begin negotiations with other political blocs.

"We will shift now to discussions for forming the next government," Allawi said. "We are working for a government that can make decisions and return Iraq back to its place in the Arab and Islamic world." 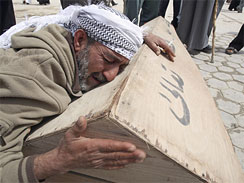 (AP Photo/Alaa al-Marjani)
As Friday's results were being announced, twin bombings hit a busy area in the town of Khalis, about 50 miles north of Baghdad - raising fears that political tensions could spill over into more violence just as U.S. forces prepare to go home.

(Left: Sabah Jalil weeps over the coffin of his son Abbas, 9, before his burial in the holy Shiite city of Najaf, Iraq, Saturday, March 27 2010. Abbas was killed in bombings Friday in the town of Khalis, about 50 miles north of Baghdad.)

The police spokesman for Diyala province, Capt. Ghalib al-Karkhi, said Saturday that 57 people had died and that 73 were wounded in the explosions, first from a car bomb that went off outside a restaurant and then from a roadside bomb just a few steps away.
By Associated Press Writer Sinan Salaheddin