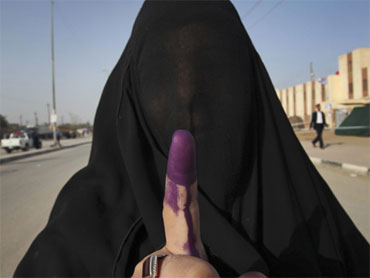 Insurgents bombed a polling station and lobbed grenades at voters Sunday, killing at least 36 people and wounding at least 89 others in attacks aimed at intimidating those taking part in an election that will determine whether the country can overcome the sectarian divisions that have plagued it since the 2003 U.S.-led invasion.

Many Iraqis hope the election will put them on a path toward national reconciliation as the U.S. prepares to withdraw combat forces by late summer and all troops by the end of next year.

Prime Minister Nouri al-Maliki is fighting for his political future with challenges from a coalition of mainly Shiite religious groups on one side and a secular alliance combining Shiites and Sunnis on the other.

Despite mortars raining down nearby, voters in the capital still came to the polls. In the predominantly Sunni neighborhood of Azamiyah in northern Baghdad, Walid Abid, a 40-year-old father of two, was speaking as mortars boomed several hundreds yards away. Police reported at least 20 mortar attacks in the neighborhood shortly after daybreak. Mortars also fell in the Green Zone - home to the U.S. Embassy and the prime minister's office.

"I am not scared and I am not going to stay put at home," said Abid, who owns a cafe. "Until when? We need to change things. If I stay home and not come to vote, Azamiyah will get worse."

Polls closed at 5 p.m. as scheduled and election officials said it could be days before preliminary results are released.

Observers warn the election is only a first step in the political process. With the fractured nature of Iraqi politics, it could take months of negotiations after results are released in the coming days for a government to be formed.

Many view the election as a crossroads where Iraq will decide whether to adhere to politics along the Shiite, Sunni and Kurdish lines or move away from the ethnic and sectarian tensions that have emerged since the fall of Saddam Hussein's iron-fisted, Sunni-minority rule.

Al-Maliki, who has built his reputation as the man who restored order to the country, is facing a tough battle from his former Shiite allies, the Supreme Islamic Iraqi Council and a party headed by anti-American cleric Muqtada al-Sadr.

"Al-Maliki gave us security despite all the terror. What more can he do?" said Mariam Omran, a 55-year-old bespectacled mother of four clad in a black chador. "All I want is peace for my country," she said after voting in the Shiite neighborhood of Kazimiyah in northern Baghdad.

"We mourn the tragic loss of life today, and honor the courage and resilience of the Iraqi people who once again defied threats to advance their democracy," he said in a statement.

Al-Maliki faces a challenge from a secular alliance led by Ayad Allawi, a former prime minister and secular Shiite, who has teamed up with a number of Sunnis in a bid to claim the government.

"These acts will not undermine the will of the Iraqi people," al-Maliki said Sunday morning, speaking to reporters after casting his ballot.

Exiting the polls, Iraqis waved purple-inked fingers - the now-iconic image of voting in this oil-rich country of roughly 28 million people.

Extraordinary security measures did not foil Sunni insurgents who vowed to disrupt the elections - which they see as validating the Shiite-led government and the U.S. occupation. They launched a spate of mortar, grenade and bomb attacks throughout the morning that, beside Baghdad, targeted the northern city of Mosul, Fallujah, a former bastion of the insurgency west of Baghdad, and small towns just to the south of the capital.

There was no immediate claim of responsibility but U.S. and Iraqi officials described the violence as the work of insurgents trying to undermine voting.

In a posting early Sunday on an Islamic Web site, the al Qaeda front group Islamic State in Iraq warned that anyone taking part in the voting would risk "God's wrath and to the mujahideen's weapons," saying the process bolsters Iraq's Shiite majority.

An Interior Ministry official speaking on condition of anonymity because he was not authorized to speak to the media said 35 people had died in Baghdad alone but did not have a breakdown of where the deaths occurred. One other death was reported in the city of Mahmoudiya, about 20 miles (30 kilometers) south of Baghdad. A bomb inside a polling center killed a policeman, said Iraqi Army Col. Abdul Hussein.

In Baghdad's northeast Hurriyah neighborhood, where mosque loudspeakers exhorted people to vote as "arrows to the enemies' chest," three people were killed when someone threw a hand grenade at a crowd heading to the polls, according to police and hospital officials. 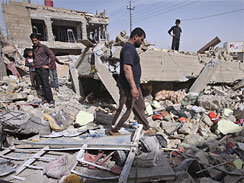 (AP Photo/Karim Kadim)
(Left: Residents gather at the scene of a blast which leveled a building in northeastern Baghdad, March 7, 2010.)

At the scene of one of the Baghdad blasts, near the Sadr City slum, rescue workers said they could hear women and children caught alive under the debris screaming for help. The blast left a mound of rubble, scattered with blankets, pillows and torn bits of clothing. Rescue workers used cranes and tractors to lift debris. Bodies were being recovered several hours after the explosion.

An explosion in the mixed neighborhood of Kirayaat, in northern Baghdad, killed one person, said police and hospital officials. There were a number of other explosions elsewhere in the country, but no other reports of fatalities.

"But what we've seen is that this psychological effect was not achieved," he said.

About 6,200 candidates are competing for 325 seats in the new parliament, Iraq's second, full-term legislature since the 2003 U.S.-led invasion seven years ago this month.

To try to secure the elections, Iraq sealed its borders, closed the airport and deployed hundreds of thousands of Iraqi military and police in the streets. Extra checkpoints were set up, and in some parts of central Baghdad, people could not go 50 yards without being stopped for search. Some voters reported strict searches in which they could not bring even pens or packs of cigarettes through the checkpoints ringing the voting centers.

Iraqi officials lifted a vehicle ban in the capital during the day to allow people to vote, but later reintroduced it to thwart attacks on ballots being driven to the capital.

In keeping with the U.S. military's assertion that Iraqis are running the elections, the only visible American military presence was in the air or escorting election observers to the polls; four U.S. helicopter gunships could be seen at one point this afternoon in the sky over northern Baghdad.

Ahmad Chalabi: A one-time Pentagon favorite and insider, Chalabi is running in the same coalition led by the Supreme Islamic Iraqi Council and the Sadrists. He failed to win a seat in the last parliamentary election in 2005, but is virtually assured of one this time around. Chalabi's relations with the United States soured when the intelligence he provided the Americans on Saddam's weapons of mass destruction proved faulty. The U.S. also accused him in 2004 of spying for Iran. Chalabi is a secular Shiite who is loathed by the country's Sunni Arab minority for the zeal he has shown in rooting out Saddam's loyalists from jobs in the government, armed forces and security agencies.
By Associated Press Writers Hamza Hendawi and Qassim Abdul-Zahra; AP Writers Katarina Kratovac, Hamid Ahmed, Saad Abdul-Kadir, Bushra Juhi, Sameer N. Yacoub, Matt Ford and Lara Jakes contributed to this report