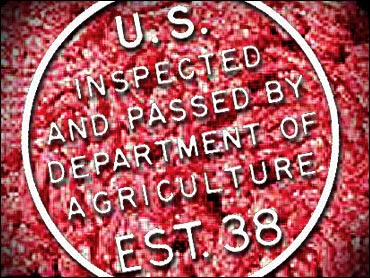 Schoolchildren in the national lunch program for the first time can munch on meat that has been sterilized through irradiation, the Agriculture Department says.

Irradiation is a technology that rids food of parasites and bacteria, including E. coli and salmonella, by exposing it to low levels of gamma rays or electrons.

The government began allowing companies to sell irradiated meat to the public in 1999, but the treated foods were prohibited in the school lunch program, Alisa Harrison, a department spokeswoman, said Friday.

The farm bill approved in May changed that, and schools will be able to purchase irradiated meat by the end of the year, Harrison said. She emphasized that it is optional.

About 25 million children participate in the federal school lunch program.

Meat companies have urged USDA to carry out such a measure, saying it will make food safer. The companies want the department to start a pilot program for purchasing irradiated ground beef for school lunches.

"It's time for USDA to acknowledge the food safety benefits of this technology and begin purchasing irradiated ground beef products for the nation's school children," J. Patrick Boyle, president and CEO of the American Meat Institute, said in a statement.

"Irradiation provides an extra margin of safety along with the many technologies already in use by the industry," he said.

Some activists say irradiated food is unhealthy, although the World Health Organization and American Medical Association have deemed it safe.

The group Public Citizen strongly opposes it, arguing the process destroys vitamins and nutrients and can develop chemicals that are linked to birth defects and cancer.

Carol Tucker Foreman, director of the Consumer Federation of America's Food Policy Institute, said she accepts the World Health Organization's assessment, but warned irradiation is "certainly not a silver bullet" for foodborne illnesses.

Food poisonings in U.S. schools have been increasing 10 percent each year, according to an audit this year by the General Accounting Office, Congress' investigative arm. There were 50 school-related outbreaks nationwide with 2,900 illnesses in 1999. Many were linked to salmonella bacteria and gastrointestinal viruses.

Supporters of irradiation say it could reduce the number of foodborne illnesses.