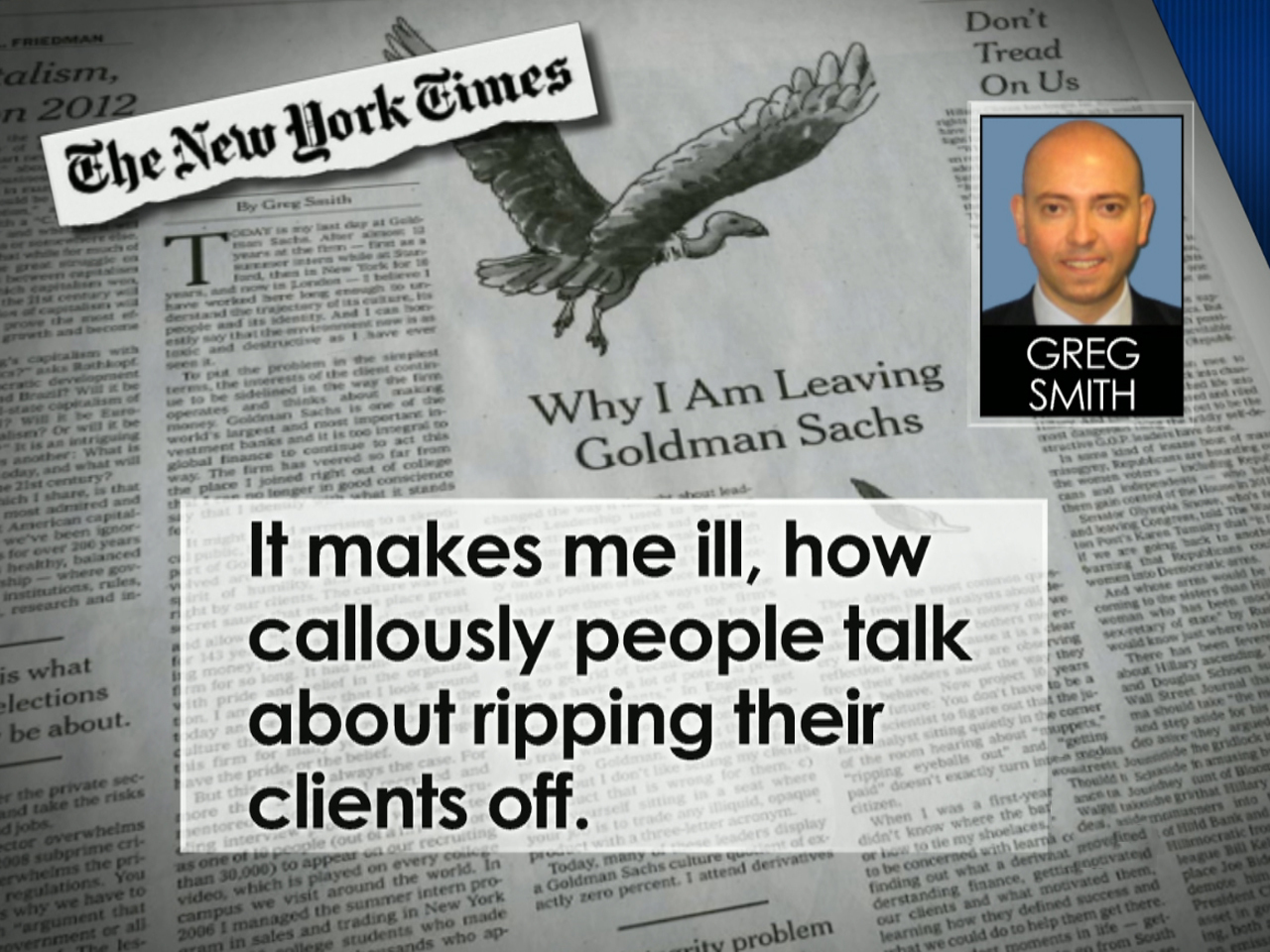 (MoneyWatch) COMMENTARY Greg Smith, the Goldman Sachs (GS) executive who blasted the firm as he walked out the door, made some stunning allegations in The New York Times. If they're true, then Goldman Sachs contains many "rogue tribes," a term my "Tribal Leadership" coauthors and I coined to describe the Mafia, the Spanish Inquisition, al-Qaeda cells and groups that launch Ponzi schemes.

It's critical that you know what rogue tribes are, because they either need to be fixed or surgically removed from your company. If left to their own devices, they will destroy everything in their path, and not feel bad about it.

Goldman exec blasts firm as he walks out the door

A company of Goldman's size has thousands of intermingling tribes, each with 20-150 people in them. The best tribes -- about 22 percent of employed tribes in our study -- are producing marvels, filled with vibrant employees, and are almost indistinguishable from rogue tribes. The "almost" in that sentence is the key -- just like cancer cells look almost like healthy tissue until they become large enough to be destructive. Rogue tribes are easily mistaken for the truly great tribes at Zappos, Griffin Hospital and Pixar. The types of culture surveys done in companies almost always miss rogue tribes, in the same way many physical exams come back clean and the patient finds a malignant lump a month later.

Rogue tribes are so much like great tribes that we delayed the publication of our book by almost a year while we sorted out the differences. After Enron, Worldcom and the 9/11 attacks, it is vital that leaders know the difference. Here's how to spot these self-deluded, destructive groups that, at least for a while, are often mistaken for great.

Rogue tribes have highly interconnected members who are devoted to delivering on non-core values. The "non-core" is the source of the problem.

There's no question that Goldman Sachs' tribes are highly interconnected and productive. Smith admits that culture has been a historic strength for the firm. Smith's op-ed piece says that: "[Goldman Sach's] culture was always a vital part of Goldman Sachs's success...[that] the culture was the secret sauce that made this place great and allowed us to earn our clients' trust for 143 years."

Goldman chiefs Lloyd Blankfein and Gary Cohn wrote a memo in response to the Smith op-ed that said, in part: "Just two weeks ago, Goldman Sachs was named one of the best places to work in the United Kingdom where [Smith] resides. The firm was the highest placed financial services company for the third consecutive year and was the only one in its peer group to make the top 25."

So there's no question that Goldman's tribes are high performing. The question is, what drives them -- core or non-core values? A core value is a principle that guides decisions and behavior, that is so central to who you are, that nothing is deeper than it. If you want to see a core value at work, ask yourself why "family" is important to you. If you're like most people, your inner voice will either fall silent, go into professor mode ("every society is dependent on its families...") or jump topics to escape the discomfort of not knowing the answer. All three responses are code for "it's important because it is" -- meaning nothing is deeper than it. It's core.

Another characteristic of a core value is that you will get ticked off when others don't experience your core value, and so you will go to extreme measures to make sure people have it. Zappos is extreme on service, and almost bankrupted itself to shift from an order placement company to having their own inventory and shipping center so they could ensure great service throughout the sales cycle. Pixar is extreme on detail and art, and people there report working far past exhaustion to make sure their movies are consistent gems.

Tribes run by core values go the same extreme measures to self-regulate their behavior. Right after Enron, NPR's Marketplace asked me if there was such a thing as a company immune to scandals. I said yes, and named Amgen as one such place. At the time -- I haven't studied them in years, so can't comment on their current culture -- they were led by core values, so if someone engaged in illegal or immoral behavior, they'd have hundreds of tribal members saying that it had to stop immediately.

Contrast core values to non-core. Money -- the focus of many tribes within Goldman Sachs, according to Smith -- is non-core for most people. Ask yourself why money is important and your inner voice will go to something like security or fairness or to help provide for your family -- all corer values. Non-core values aren't bad, they just aren't deep enough to be lasting guidelines of what the tribe should do. The trick is see non-core values as good but superficial. Everyone reading this blog values money. Here's proof: if you were offered a free bag of cash (no strings attached, no one harmed), would you take it? But just because it's valuable doesn't mean it's core. Keep digging until you find values so deep it's like you've hit bedrock.

When a tribe is focused on non-core values, the extreme self-regulation disappears as people look the other way. People begin to tolerate ethical lapses, small declines in service and even derision of clients. The tribe loses the focus on others. Remember -- people are only zealots about others being left out in the cold if the discussion involves their core values. When it doesn't, the focus easily drifts to "our glory," "our reputation" and "our prestige." Sound like the Penn State football program? By all accounts, that tribe went from great to rogue, and we know the damage that followed.

Here's the danger of non-core values. Al-Qaeda values its interpretation about religion, and if you don't share those views, killing you is acceptable. The Mafia values their family, and will do anything -- including killing, lying under oath or living double lives -- to protect it. Notice the focus is not on providing our values for others, it is destroying anyone who gets in the way of us getting ours. The coin of the realm becomes loyalty to the tribe, not service of higher values. So if Smith is right, the focus became money, and people used the high-performing tribes at Goldman, and the resources, reputation and brilliance of the firm, as a way to seek ever more profits -- not as a fair return for their services, but as an end in itself.

So who is right -- mud-thrower Smith or defenders-of-the-faith Blankfein and Cohn? Smith's op-ed perfectly describes a set of tribes that were once great, and then began to slowly drift from core values of teamwork, integrity, humility and doing what's best for the client, to the non-core values of money and fame. If this shift happened, then here would be the results. First, the company would start attracting the money-seekers, rather than people who shared the core values that once made it great. Second, the gradual drift to financial returns would be accompanied by a slow drift away from "doing right by clients," to quote from Smith's list of core values. The meetings Smith describes where client needs were never discussed would be typical of great tribes turning rogue.

Third, people who are the best at getting results will tend to get promoted, rather than the "keepers of the sacred flame" of core values. As former USC president Steven Sample told my co-authors and me: when people interested mostly in their own careers are put in leadership positions, the result is "institutional rot." Smith's op-ed piece follows this pattern exactly.

And finally, when confronted with evidence of the drift, the first reaction is to be hypercritical of the accuser. Remember that the focus has gone from servicing others on the basis of our core values to "our glory," so that anyone who attacks the group is an infidel. Only overwhelming evidence exposes the rot that's been at work for years, and only then does the institution come crashing down.

I don't have personal knowledge of Goldman Sachs' recent culture, but as someone who has spent many years focused on organizational culture, I will say that Smith's op-ed is much like the comments my co-authors and I heard about tribes that went rogue, and the Goldman response follows the script you'd expect when the rogue tribes are attacked.

The question now is: will more evidence follow? If not, this will be forgotten, unless it happens again. If so, we'll see Penn State repeat itself, and if it's not too late, a new regime will have the opportunity to refocus on core values, and to surgically remove the rogue tribes. If Goldman Sachs' leadership, or the leadership in any organization, wants to get serious about ensuring rogue tribes are reined in, take a look at my personal blog.