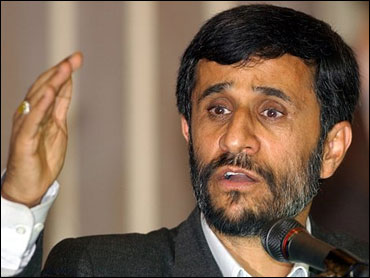 
Iranian President Mahmoud Ahmadinejad, has written a long letter to President George W. Bush — and now he's said during a trip to Indonesia that he's willing to talk to American officials. Some of our allies, including German officials, have openly suggested that Washington begin a dialogue with Tehran. Sen. Chuck Hagel, R-Neb., wrote this week in The Financial Times (May 8) that "The U.S. should engage Iran directly with an agenda open to all areas of agreement and disagreement."

But the Bush administration is having none of it. Secretary of State Condoleezza Rice said on ABC's "Good Morning America," after the Iranian leader's 18-page message arrived, "It really doesn't offer a solution to the nuclear impasse, it doesn't talk about Iran's role in terrorism around the world, and there really isn't anything there to consider it a diplomatic overture." Perhaps Rice is correct. But maybe, just maybe, it is the Iranian regime's way of doing just that — making a diplomatic overture.

It is clearly obvious the letter was not your ordinary piece of diplomatic correspondence. Rice described it as "a broad, kind of philosophical, really, attack on the President and on his policies, and I don't think you can consider that a diplomatic opening." Others have described it as a rambling monologue, heavily tinged with religious overtones and clearly not friendly to American policies — including the invasion of Iraq.

However, the letter could also be seen as a positive step in a new direction for relations between the United States and Iran, which have largely been kept in the freezer for more than a quarter of a century after American diplomats in Tehran were taken hostage in 1979.

Only in recent years, and only under special circumstances — such as discussions surrounding a new government in Afghanistan after the Taliban was ousted — have American diplomats participated in meetings with Iranian officials present. The Clinton administration made gestures toward Tehran, allowing the importation of Persian carpets and pistachio nuts, but no serious diplomatic openings followed. In the past five years, the Bush administration has grown even more wary of Iran's policies on everything from its nuclear programs to its support for terrorism and its negative record on human rights.

Thus, it's not exactly a surprise that Mr. Bush, his secretary of state and other administration officials see this week's letter not as something to be seized for the opening it might represent, but as just another example of the Iranian regime's unwillingness to listen to the international community's call for it to end its nuclear weapons program.

However, one former senior official in the Bush administration is encouraging his former colleagues to take a more direct role in dealing with Iran. Richard Haass, former head of policy planning under Rice and now the president of the Council on Foreign Relations, says the administration's approach on Iran "has been flawed in design, and has certainly come up short in results."

Speaking to a group of policymakers at the Washington Institute for Near East Policy, Haass cited the administration's reaction to Ahmadinejad's letter as an example of Washington's current approach. "We should respond, if not to the letter we got, to the letter we wish we got." Haass explained that such a response would mention the nuclear issue, which the Iranian president's letter did not do. Also, he said, "more broadly, (it would) express a vision that would improve the quality of life for the average Iranian."

Harvard's Graham Allison, speaking at the same forum, said that America's options were not good in any case, but noted that a strategy that leaves out direct contact between Washington and Tehran isn't viable. "The Europeans don't have what Iran is most interested in" according to Allison — namely some form of security guarantee from the United States that Iran won't be attacked in an effort to overthrow a regime that the Bush administration so openly detests.

In the next few weeks, the policy will not change dramatically. It will evolve as American officials deal with their European colleagues to try to pressure Iran with an offer of benefits and penalties, the so-called "carrot-and-stick" approach. Allison warns this is not likely to work and says what's really needed is something new — thinking outside the box. At this point there's no indication that the Bush administration sees the need for such an approach.