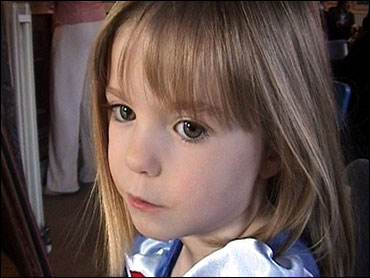 Four-year-old Madeleine McCann is said to have been spotted in Morocco and CBS News correspondent Mark Phillips reports that even before their very public falling out with Portuguese police when they were named suspects in the disappearance of their own child, the McCanns had hired a private security firm to mount its own investigation.

The McCanns engaged a firm called National Risk Group which specializes in following up kidnapping. One of their jobs has reportedly been to keep track of the many reported sightings of the little girl.

Madeleine disappeared from a Portuguese resort on May 3, shortly before her fourth birthday. Her parents said they had left the girl and her younger twin siblings asleep in their rented villa while they had dinner nearby. Despite an extensive search and a worldwide publicity campaign by her parents, no trace of Madeleine has been found.

There have been reports of more sightings in Morocco, one of the
countries Kate and Gerry McCann visited and tried to publicize
her disappearance. But they've become used to false sightings.

While the McCanns are officially suspects, Portuguese police say they have no immediate plans to question them again and do not seem to
have enough evidence to charge them. The McCanns protested their
innocence throughout and say they want police to focus their
efforts on finding their daughter they still believe to be alive.

Police say they have no further leads.

Meanwhile, the family has received support from a millionaire businessman, the latest tycoon to provide financial backing to the family's search.

Brian Kennedy, owner of the Latium Group, who is estimated to be worth half a billion dollars, said late Saturday he felt "compelled" to support Gerry and Kate McCann following accusations that they may have been involved in their daughter's disappearance.

"In light of the quite literally incredible accusations against Gerry and Kate McCann, which are clearly exacerbating their emotional torture, I felt compelled to offer, along with other like-minded businessmen, financial support and the full logistical support of the Latium team," Kennedy said in a statement.

Others known to be supporting the McCanns include billionaire tycoon Richard Branson, who has donated $200,000 to help the McCanns with their legal bills.

Kennedy said he will be paying the fees for the couple's official spokesman, Clarence Mitchell, and providing them with the services of his company's lawyer, Ed Smethurst.