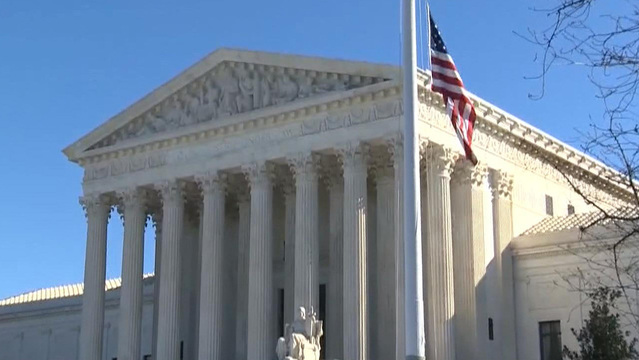 President Obama will announce his nominee to fill the vacancy on the Supreme Court this morning.

In an email saying he'll introduce his choice in the White House Rose Garden, Mr. Obama said, "As President, it is both my constitutional duty to nominate a Justice and one of the most important decisions that I -- or any president -- will make.

"I've devoted a considerable amount of time and deliberation to this decision. I've consulted with legal experts and people across the political spectrum, both inside and outside government. And we've reached out to every member of the Senate, who each have a responsibility to do their job and take this nomination just as seriously."

The recent death of Justice Antonin Scalia left a vacancy on the high court.

GOP members of Congress have vowed to block any hearings on the nominee until 2017, when an new president is in place.

The president's email continued, "I'm confident you'll share my conviction that this American is not only eminently qualified to be a Supreme Court Justice, but deserves a fair hearing, and an up-or-down vote.

"In putting forward a nominee today, I am fulfilling my constitutional duty. I'm doing my job. I hope that our Senators will do their jobs, and move quickly to consider my nominee. That is what the Constitution dictates, and that's what the American people expect and deserve from their leaders."

A number of names have circulated as possible nominees. Here are a few of them:

Among the likely frontrunners is U.S. D.C. Circuit Judge Sri Srinivasan. If confirmed by the Senate, the 49-year-old would be the first Indian-American and first Hindu to serve on the high court and the first foreign-born justice to serve on it in more than 50 years.

Born in India, he moved to Lawrence, Kansas with his family when he was a child.

For the last three years, Srinivasan has served on the U.S. Court of Appeals for the D.C. Circuit after the Senate unanimously confirmed him in a 97-0 vote, nearly a year after Mr. Obama first appointed him. Three of the current eight justices served on the D.C. Circuit including John Roberts, Clarence Thomas and Ruth Bader Ginsburg. Scalia, who died on Feb. 13., also served on that court.

Before that appointment, Srinivasan served as principal deputy solicitor general at the Justice Department for two years in the Obama administration. He also spent five years working in that office under President George W. Bush. He has argued more than two-dozen cases before the Supreme Court.

In the late 1990s, Srinivasan clerked for Supreme Court Justice Sandra Day O'Connor, who was appointed by President Ronald Reagan. He received his bachelor's degree, law degree and MBA from Stanford University and taught appellate advocacy at Harvard Law School.

Another contender is U.S. Circuit Court Judge Merrick B. Garland, who currently serves the Chief Judge on the U.S. Circuit Court of Appeals for the District of Columbia, a post he took over in 2013. He has served on the D.C. appellate court since 1997, when he was nominated to the bench by former President Bill Clinton. He was confirmed with a 76-23 vote.

This is not the first time Garland, who hails from President Obama's home in Chicago, has been considered for a Supreme Court seat.

Following the 2010 retirement of Justice John Paul Stevens from the Supreme Court, Garland's name was also floated for the nomination. The seat was eventually filled by Associate Justice Elena Kagan, then the Solicitor General.

Before his career as a judge, Garland, 63, held several positions in the public and private sectors.

Also considered as a potential nominee is U.S. Court of Appeals Judge Paul Watford. If confirmed by the Senate, the 48-year-old will be the second black sitting justice on the high court and the third black justice to serve on the court after Thurgood Marshall and Clarence Thomas.

Just a few years ago, Mr. Obama nominated him to the Ninth Circuit, and the Senate confirmed him in 2012 in a 61-34 vote. Nine GOP senators voted in favor, including five who are still serving in the upper chamber: Sens. Lamar Alexander of Tennessee, Susan Collins of Maine, Lindsey Graham of South Carolina, Lisa Murkowski of Arkansas and John McCain of Arizona.

Watford previously worked for law firms Sidley Austin and Munger, Tolles & Olson where he was eventually named a partner. He also served as an assistant U.S. attorney in Los Angeles for three years.

Between 1995 and 1996, he clerked for Justice Ruth Bader Ginsburg, who was appointed by President Bill Clinton, and still serves on the high court at the age of 83.

U.S. Circuit Court Judge Jane Kelly is also considered to be in the running.

Kelly was appointed to the U.S. Court of Appeals for the Eighth Circuit by President Obama in 2013. The Senate unanimously confirmed her nomination 96-0 a few months later.

The court has jurisdiction over North Dakota, Nebraska, Minnesota, Iowa, Missouri and Arkansas. She's the second woman to serve on the 8th circuit.

Kelly joined the Federal Public Defender's Office for the Northern District in 1994, working in that office for nearly two decades and defended people accused of committing federal crimes.

Kelly graduated from Harvard Law School in 1991 and received her undergraduate degree from Duke University.

U.S. Circuit Court Judge Patricia Ann Millett is also in the mix. Millett was appointed to the U.S. Court of Appeals for the District of Columbia in 2013.

Her confirmation was initially stalled over a Republican filibuster, with Millett receiving just 55 of the 60 votes needed to end debate over a nominee.

After the Senate later voted in 2013 to reform filibuster rules and prevent its use in the confirmation process of top officials, Millett was one of the first to be installed on a circuit court bench, with a 56-38 vote.

Prior to her appointment to the appellate court, Millett worked as an attorney at the private firm Akin Gump Strauss Hauer & Feld LLP.

She previously clerked for a Court of Appeals judge in the 9th circuit, after which she worked for four years on the appellate staff in the Justice Department's Civil Division. She also served for eleven years as an assistant in the U.S. Solicitor General's office.

She has argued 32 cases before the Supreme Court.

Any of these candidates would face an uphill battle in Congress. The Senate must confirm the nomination, but the Republican majority has already ruled out considering it. Senate Republican leaders have said they will refuse to hold confirmation hearings or votes until the next president is sworn in next January.

Mr. Obama has called on Senate Republicans to fulfill their constitutional responsibility to confirm his nominee and ensure that the court is complete with nine members.

But GOP leaders have offered no real opening to the president, as they wish to make the 2016 presidential election a referendum on the future of the Supreme Court.