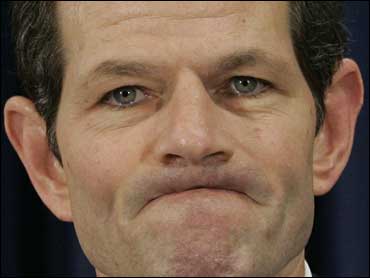 (AP Photo/Mary Altaffer)
The New York Post is reporting this morning that disgraced former N.Y. Governor Eliot Spitzer might be thinking about trying to make a political comeback and run for Senate or state comptroller next year.

Sources told the paper that the former Democratic governor, who resigned in March 2008 after he was identified as "Client 9" in a prostitution scandal, has been talking privately over the possibilities with friends. He is reportedly eyeing poll numbers which show him more popular than David Paterson, the man who replaced him as governor.

However, it should be noted that three other sources denied the story in the paper. And Spitzer himself has already come out to deny it as well.