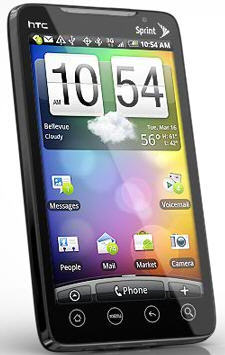 On June 4th, Sprint will release what, for the time being at least; will be the coolest phone on the planet. I got a chance to preview the HTC EVO-4G, and based on my experience, Sprint and HTC have a winner.  No, it won't kill the iPhone but it does prove that Apple is far from the only innovator in the smartphone market

The phone runs Google's Android operating system but like some other HTC phones, it also has the HTC Sense user interface that adds a more user friendly front-end to the phone. Sense has a number of enhancements over the basic Android interface including a "friend stream" that aggregates your social networking experiences into a single stream enabling you, for example, to see your friends' Facebook and Twitter updates on one screen while simultaneously updating your own Twitter and Facebook status.

Unfortunately, I wasn't able to test the phone's most heralded feature - its ability to run on Sprint's fast 4G network. That's because Sprint has, so far, only rolled-out 4G in 32 markets, not yet including New York where I find myself this week. A few months ago I tested Sprint's Overdrive WiFi adapter on the company's 4G network in Las Vegas and I was impressed. Wall Street Journal's Walter Mossberg was able to take his EVO 4-G phone to Baltimore where he experienced "the highest consistent downstream data speeds" he had "ever seen on a cellular network."

Another feature of this phone is the ability to create its own WiFi hotspot. When it's turned on you'll be able to wirelessly connect up to 8 PCs or other WiFi-equipped devices to the Internet via the phone. Sprint plans to charge an extra $30 for the service above whatever voice and data plan you already have. In fairness, that's about half the monthly cost that Sprint and its competitors' typically charge to use standalone wireless adapters.

The EVO is one of the few phones to have two cameras. One is an 8 megapixel back-facing camera for taking photos and high-definition (720p) video. The other is a front-facing camera that you can use to engage in a video conference or take a picture of yourself. The phone comes with the Qik video app that lets you share live video. With it, you can "broadcast" live video to the web though, in my test, I experienced a significant time delay between what the camera was aimed at and what the viewer saw and heard.

The phone is fairly large as smartphones go, measuring 4.8 by 2.6 by .5 inches but for that you get a great 4.3 inch 800x480 display which makes web pages look quite nice. Like the iPhone it has a multi-touch interface that lets you zoom in or out by pinching with your fingers.

It has the same fast 1GHz Qualcomm Snapdragon processor as the Google Nexus One and several other new smartphones. There is an HDMI port for digital video output to high-definition TVs. The phone comes with an 8 gigabyte microSD card and supports up to 32 GB.
The phone weighs six ounces and Sprint claims it gets 6 hours of talk time but admits that "time may vary depending on 3G/4G coverage. Use of the phone on 4G networks will deplete battery life as will running lots of Android applications. Regardless of what Android phone you use, you have to carefully monitor what you're running in the background to avoid unnecessary drain on the battery.

The EVO costs $199 with a two-year contract and usage plans start at $69.99 a month plus a mandatory $10 charge for 4G service which everyone pays, even if they don't use the service or don't live in or travel to a 4G market.

Bottom line: This is the most advanced Android phone on the market and an excellent option for anyone looking for a full-featured smartphone with Web access, an excellent camera and some very advanced features.