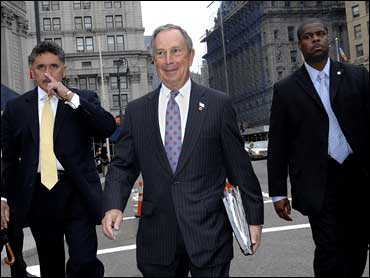 This column was written by Britt Peterson.

Give me back the marmalade," Gerald Rafshoon snaps. His breakfast-table companion, Douglas Bailey, has been taking a bit too much time smearing his English muffin. "See - those Republicans; you give them something, they hold onto it." It continues like this all morning. Rafshoon, a former media adviser to Jimmy Carter, and Bailey, a former media adviser to Gerald Ford, trade barbs about partisan stereotypes and which old party star is more ancient. But their joshing comes with a point. As two-thirds of the founders of Unity '08, a nascent third-party attempt that intends to nominate a bipartisan ticket in '08, they're trying to prove that Democrats and Republicans working together will prove more popular than either side.

If that sounds a little simplistic - particularly in the era of George W. Bush and Karl Rove - well, it is. "Texas is red, New York is blue, Unity '08 is for me and for you!" Rafshoon sings at one point. Breakfasting with Rafshoon and Bailey is a bit like a private performance from Lucy and Desi - an hour of the Jerry and Doug Show, jokey, cordial, and always staged. The forced banter points to exactly what is wrong with their brainchild: Their bipartisanship is a façade, and a fragile one at that.

Along with Hamilton Jordan, Carter's chief of staff, Rafshoon and Bailey, fed up with polarized, two-party politics, formed Unity '08 in October 2005 to create a golden era of bipartisan cooperation and clean electioneering - an era which, not coincidently, bears a certain resemblance to a rose-tinted view of Jordan, Rafshoon, and Bailey's heyday. "Doug and I faced each other in 1976," Rafshoon explains. "We each spent $21 million. His idea of negative campaigning was to say that Carter was a one-term Georgia governor who didn't know his way around Washington, which was true; my idea of negative campaigning was to say that Gerald Ford was a hard-hearted Republican, which was true. It was civil in those days."

This nostalgia, combined with the genuine frustration many Americans do feel with partisan politics - the Unity '08 Web site proclaims that 82 percent of Americans think Washington is too polarized to function - has sparked centrist-chic mini-buzz around Unity '08. David Broder has written positive editorials about the group. Sam Waterston, that other actor from "Law & Order," has done the circuit of TV talk shows to promote it. ("I'm just the cheerleader here," Waterston told Chris Matthews on "Hardball" in July.) Billionaire New York mayor Michael Bloomberg's well-publicized defection from the Republican Party in June added fuel to the fire: Though Bloomberg's spokesman, Stu Loeser, told me the mayor was definitely not running for president in 2008, his flirtations have raised the possibility that an astronomically well-capitalized candidate could run on the Unity '08 ticket. Unity '08 won't discuss candidates, but the day after Bloomberg registered as an Independent, the "news" rubric on the Unity '08 homepage was entirely filled with links to stories about it.

Most recently, former Georgia Senator Sam Nunn told The Atlanta Journal-Constitution that he has been talking to Unity '08 about a possible run. "My own thinking is, it may be a time for the country to say, 'Time out. The two-party system has served us well, historically, but it's not serving us now,'" Nunn said. Nunn also said he had spoken with Bloomberg about a presidential run. (Bailey told me that Unity '08 can't comment on the potential candidates they brief, but he called Nunn a "great public servant" and said that, along with the other 50 or so candidates whom they have spoken with, Nunn is "symbolic of a different kind of politics than what is seen today." Loeser wouldn't comment on the mayor's private conversations.)

Anyone looking for larger ideas than a return to civility won't get much from Unity '08, however. In our conversation, Bailey and Rafshoon wouldn't take any policy stands, deflecting questions until after a candidate has been chosen in a "Virtual Convention" slated for next summer. "We're not interested in spelling out or even having the delegates spell out a precise platform, where, by God, you must meet these tests or we don't want you to run," Bailey tells me. "That doesn't make much sense." Doing so, he says, would repel candidates, not attract them. Rafshoon, too, focuses on process and ethics, rather than issues. "Campaigns are run on the negatives," he tells me. "That's the promise they make to the people: 'He's no good, vote for me!'"

But the issues they do discuss don't even seem that compatible. Bailey mentions three times the only Unity '08 issue that's historically a Republican idée fixe: entitlements and the deficit. "Has there been an effort by a single candidate in either party to talk seriously about the deficit and entitlements?" he asks me. On the other side of the table, Rafshoon does seem sympathetic to the idea of a candidate focusing on the deficit (he mentions in passing that one of Ross Perot's successes was to help set Clinton's budget-balancing agenda). But, balanced this issue with Unity '08's other, admittedly spare, stated concerns, the whole thing begins to look a little contradictory: cutting down on entitlements while also expanding health care, reducing income equality, and cleaning up the environment? How well can a platform built on flimsy, mismatched legs stand? (See Jon Chait's recent TRB column, "Bloomsday," for a fuller explication of some of these contradictions.)

Of course, Unity '08's coherence problem may be the least of their hurdles. As John Anderson, Ross Perot, and Ralph Nader can attest, the deck is stacked against third-party candidates. Getting on the ballot in all 50 states, securing a podium at the debates, facing voters repelled by the idea of feeding a spoiler, and managing to win in the electoral college's winner-take-all system is well-neigh impossible for an outside contender. "The American political process is, in effect, hyper-gerrymandered [against third-party candidates]," Micah Sifry, author of "Spoiling for a Fight: Third Party Politics in America," tells me. Even Perot, in some ways an incredibly successful third-party candidate (and, incidentally, another one managed by Hamilton Jordan), who was able to buy his way onto ballots in all 50 states and the debate stages, won 19 percent of the popular vote but not a single electoral vote.

It's doubtful that Unity '08, even if it's able to spend at a Perot-campaign level (certainly easier if Bloomberg signs on), will fare any better. "We'll go through the period during the election season where it sure would be fun to imagine the possibilities," says Stephen Rosenstone, a political science professor at the University of Minnesota and an author of "Third Parties in America." "And we will be told, if that campaign goes forward, that this is the exception. [But] all the previous candidates: they, too, were going to be the exceptions."

Bailey and Rafshoon have an answer: This is the most important election ever, so all bets are off. But might the current situation, brought on by a vastly unpopular Republican president, send voters to the opposition party, rather than to a Democrat/Republican ticket? Not always, they say. "There is a tendency also to say that it's never happened, there's never been a third-party candidate. Not true. Not true," Bailey says. "At a moment of truth for the country - and that's where we think we are - 1860, the country elected a third-party president. It was Lincoln. And the Whig Party went out of existence." Right on cue, Rafshoon quips, "There was no real crisis then, was there?" Sure, it's nice to see a Democrat and a Republican joking together - just like it would be nice to see the end of partisanship in America. But Jerry and Doug's show doesn't seem ready for prime time.

By Britt Peterson
If you like this article, go to www.tnr.com, which breaks down today's top stories and offers nearly 100 years of news, opinion and analysis