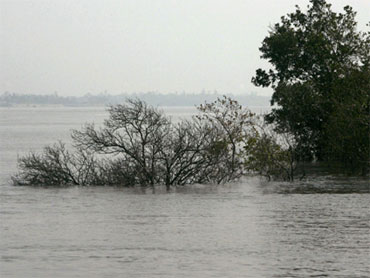 For nearly 30 years, India and Bangladesh have argued over control of a tiny rock island in the Bay of Bengal. Now rising sea levels have resolved the dispute for them: the island's gone.

New Moore Island in the Sunderbans has been completely submerged, said oceanographer Sugata Hazra, a professor at Jadavpur University in Calcutta. Its disappearance has been confirmed by satellite imagery and sea patrols, he said.

"What these two countries could not achieve from years of talking, has been resolved by global warming," said Hazra.

Scientists at the School of Oceanographic Studies at the university have noted an alarming increase in the rate at which sea levels have risen over the past decade in the Bay of Bengal.

Until 2000, the sea levels rose about 0.12 inches a year, but over the last decade they have been rising about 0.2 inches annually, he said.

Another nearby island, Lohachara, was submerged in 1996, forcing its inhabitants to move to the mainland, while almost half the land of Ghoramara island was underwater, he said. At least 10 other islands in the area were at risk as well, Hazra said.

"We will have ever larger numbers of people displaced from the Sunderbans as more island areas come under water," he said.

Bangladesh, a low-lying delta nation of 150 million people, is one of the countries worst-affected by global warming. Officials estimate 18 percent of Bangladesh's coastal area will be underwater and 20 million people will be displaced if sea levels rise 3.3 feet by 2050 as projected by some climate models.

India and Bangladesh both claimed the empty New Moore Island, which is about 2 miles long and 1.5 miles wide. Bangladesh referred to the island as South Talpatti.
632938
There were no permanent structures on New Moore, but India sent some paramilitary soldiers to its rocky shores in 1981 to hoist its national flag.

The demarcation of the maritime boundary - and who controls the remaining islands - remains an open issue between the two South Asian neighbors, despite the disappearance of New Moore, said an official in India's foreign ministry, who spoke on condition of anonymity because he was not authorized to speak on international disputes.