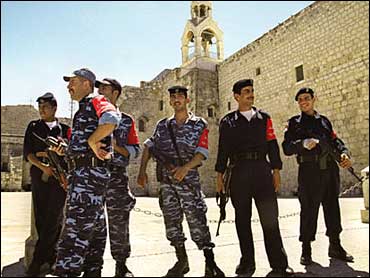 The Israeli army said on Tuesday it would relax restrictions on some Palestinians entering Israel from Bethlehem after "relative quiet" took hold in the West Bank city under a new security plan.

The United States urged the Israelis and Palestinians to renew efforts to revive the stalled Gaza-Bethlehem plan, which has been seen as a test case for a wider truce in the 23-month Palestinian uprising against Israeli occupation.

Palestinians have called for the plan, which was agreed last week, to be implemented in the Gaza Strip and hope moves to end curfews and closures are applied in other West Bank cities, where Israel sent troops in June after suicide attacks.

Under the plan, Israel ended military operations in Bethlehem last Tuesday but kept its troops on the outskirts, underscoring the fragility of the deal under which Palestinian police were deployed in the city to ensure calm.

"In light of the relative quiet in Bethlehem...it has been decided...to ease conditions for the Palestinian population," the army statement said.

It said the army would allow more workers, education and religious representatives, commodities and merchants with permits to enter Israel. It gave no date or further details.

More than 150,000 Palestinians live in Bethlehem and the adjacent towns of Beit Jala and Beit Sahour. Some of them dart through olive groves and over surrounding hills to evade army checkpoints and try to reach jobs in Jerusalem.

Citing what it called intelligence warnings of suicide attacks, Israeli forces resumed raids in the West Bank at the weekend amid an apparent stalemate over how to broaden the plan.

Israel has not carried out its pledge to ease military closures in the Gaza Strip amid new violence there and an agreement for a withdrawal from Hebron foundered at the weekend.

"We continue to urge both sides to continue to move down that road that they started with," U.S. State Department spokesman Richard Boucher told a briefing in Washington.

He said Palestinian security forces must take over "so that they can prevent the recurrence of violence and terror."

That comment from Washington came as President Bush, at his ranch in Crawford, Texas, prepared for a visit beginning Tuesday from the Ambassador of Saudi Arabia. The Mideast - and Iraq - are both on the agenda for Prince Bandar bin Sultan's discussions with Mr. Bush, although the visit will be private and includes the Prince's wife and children.

In Israel Tuesday, a military source said the Israeli commander of a brigade in the Gaza Strip held talks in a "good spirit" with Palestinian counterparts on Monday on how to improve security and "the quality of life of the Palestinians."

Israeli security sources said he was behind three suicide bombings that killed 39 people in Israel. Several other suspected militants were also arrested in the raid.

At least 1,510 Palestinians and 589 Israelis have been killed in violence since September 2000.