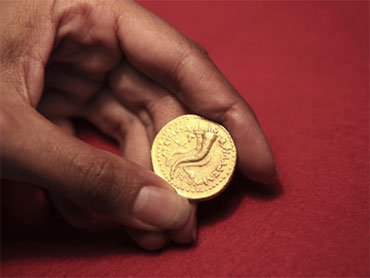 Archaeologists say they have uncovered the heaviest and most valuable gold coin ever found in Israel.

The 2,200-year-old coin weighs an ounce and was found at the Tel Kedesh site near the Lebanon border on June 22, according to Wednesday's statement from the antiquities authority.

It said this coin is six times the weight of most others from that era.

Donald Ariel, head of the antiquities authority coin department, said the coin dates back to the rule of the Iraq-based Seleucid Empire, though it was minted by the rival Egyptian Ptolemies.

Ariel said the coin's image may represent Cleopatra I, wife of Ptolemy V. It is only the second gold Ptolemaic coin ever found in Israel. The first weighed just 0.07 ounces.