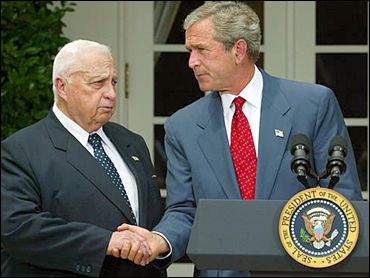 President Bush expressed firm U.S. support for Israel and the peace process Tuesday, and again said the Palestinians must end terror, he also warned Prime Minister Ariel Sharon to "consider the consequences of all actions."

Sharon, in turn, praised the president for removing the "tyrant" from Iraq.

Sharon was in Washington to explore the actions Israel wants from the Palestinians to reduce the threat of terror and advance peace prospects.

However, Sharon said Israel will continue building a controversial security fence — but promised to do so with as little disruption to the Palestinian population as possible.

The fence, like the release of Palestinian prisoners, is a major bone of contention in the Mideast peace process.

Palestinian Prime Minister Mahmoud Abbas left a long list of demands with the White House last Friday, including the release of thousands of Palestinian prisoners and a halt to construction of a security fence meant to separate Israel from Palestinian areas.

"We think it prevents the extremists from the ability to destroy the peace process," he said.

"I encouraged the prime minister to take further steps to improve the daily conditions faced by Palestinians," Mr. Bush said in the Rose Garden. "Israelis and Palestinians deserve the same chance to live normal lives free from fear, free from hatred and violence and free from harassment."

"I also urged the prime minister to carefully consider all the consequences of Israel's actions as we move forward on the road to peace," he added.

That the two disagree on the security fence was apparent from their press conference.

"I said we shall continue building the fence. But I shall choose ways which will disturb the Palestinians as little as possible," the Israeli leader said.

"I would hope in the longer term that the fence would be irrelevant," Mr. Bush said. "The fence is a sensitive issue. I understand that."

For his part, Sharon noted that, "While relative quiet currently prevails in Israel, terror has not yet completely ceased."

On another touchy issue, Sharon said the two leaders had agreed there would be no release of prisoners "with blood on their hands," those directly involved in killing civilians or the planning of such attacks.

Abbas last week demanded the release of most of the some 7,000 Palestinian prisoners held in Israeli jails. A few hundred have been released and Sharon has promised to release several hundred more.

The two leaders also discussed the issue of Israeli settlements in the West Bank and Gaza.

The road map peacemaking proposal requires Israel to halt "settlement activity" at nearly 150 formal Jewish settlements. In addition, Israel must take down small settlement outposts that have gone up since March 2001. Israel has removed about a dozen such outposts in recent weeks, but others have gone up.

"Unauthorized outposts will be removed as required in a law-abiding country," Sharon said.

He also reiterated Israel's call for the Palestinians to do more about disarming terrorist organizations such as Hamas and Islamic Jihad.

"We are thankful for every hour of increased quiet and less terrorism, and for every drop of blood that is spared," Sharon said. "At the same time, we are concerned that this welcome quiet will be shattered any minute as a result of the continued existence of terror organizations which the Palestinian Authority is doing nothing to eliminate or dismantle."

Meanwhile, the perpetrators of the kidnapping and murder of the Israeli soldier, Oleg Shaichat, 20, could be Israeli citizens, reports CBS News Correspondent Robert Berger.

He was killed near several Israeli Arab villages, so police suspect that the perpetrators were Israeli Arabs. About 20 percent of Israel's population is Arab, and while most are loyal to the state, growing numbers have been involved in terrorism and Islamic fundamentalism.

Israeli Arab lawmaker Abdel-Malik Dehamshe, who comes from the area where the soldier's body was found, condemned the killing.

He told the Maariv newspaper that Arab residents "are praying the murderers of Oleg Shaichat did not come from their village. I am certain that if, God forbid, it turns out otherwise, that we will all denounce the murderers."