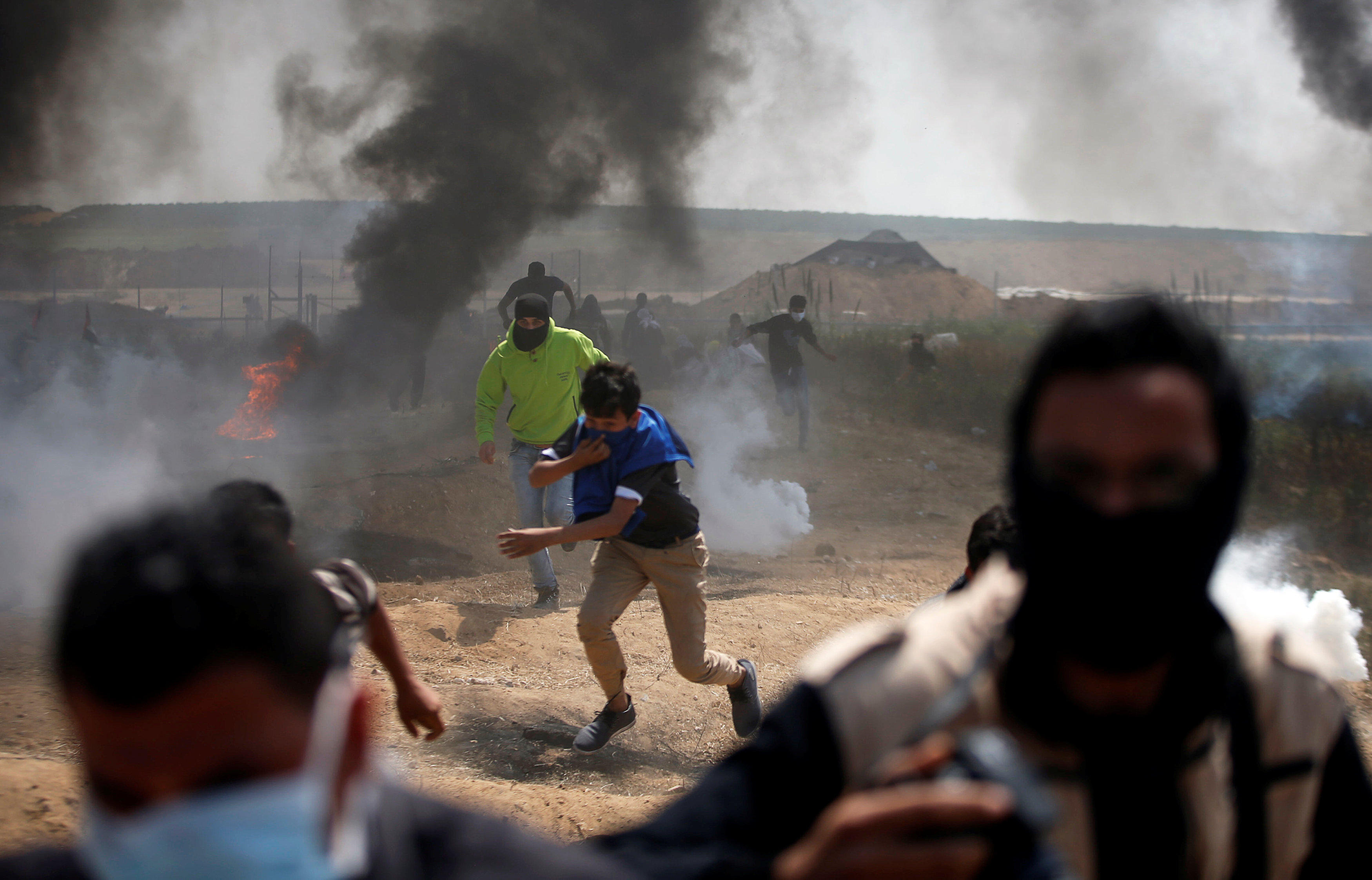 KHUZAA, Gaza Strip -- Thousands of Palestinians protested along Gaza's sealed border with Israel on Friday, engulfing the volatile area in black smoke from burning tires to try to block the view of Israeli snipers and cheering a Hamas strongman who pledged that the border fence will eventually fall.

Israeli troops opened fire from across the border, killing seven Palestinians and wounding 293 others -- 25 of them seriously -- in the second mass border protest in a week, Gaza health officials said. Hundreds more suffered other injuries, including tear gas inhalation, the officials said.

The number of Palestinians killed by Israeli fire since last week has risen to 29.

The latest casualties were bound to draw new criticism from rights groups that have branded Israel's open-fire orders on the border as unlawful, after Israel's defense minister warned that those approaching the fence were risking their lives.

The U.N. warned early Friday, as the protesters massed on the Gaza border, that Israeli forces must only use their firearms as a last resort. The Reuters news agency quoted U.N. human rights spokeswoman Elizabeth Throssell as saying in Geneva that if Israeli troops open fire and it is determined to be unjustified, it could constitute a breach of the Fourth Geneva Convention, for the wilful killing of civilians.

An Israeli military spokesman defended the rules of engagement.

"If they are actively attacking the fence, if they are throwing a molotov cocktail that is within striking distance of Israeli troops or similar activities, then those persons, those rioters, become, may become, a target," said Lt. Col. Jonathan Conricus.

Friday's large crowds suggested that Hamas, the Islamic militant group that has ruled Gaza since a 2007 takeover, might be able to keep the momentum going in the next few weeks. Hamas has called for a series of protests until May 15, the anniversary of Israel's founding when Palestinians commemorate their mass uprooting during the 1948 war over Israel's creation.

Israel has alleged that Hamas is using the mass marches as a cover for attacking the border fence, and has vowed to prevent a breach at all costs.

The military said that on Friday, protesters hurled several explosive devices and firebombs, using the thick plumes of smoke from burning tires as a cover, and that several attempts to cross the fence were thwarted.

Gaza's shadowy Hamas strongman, Yehiyeh Sinwar, told a cheering crowd in one of the protest camps Friday that a border breach is coming.

The world should "wait for our great move, when we penetrate the borders and pray at Al-Aqsa," Sinwar said, referring to the major Muslim shrine in Jerusalem.

He was interrupted several times by the crowd, who chanted, "We are going to Jerusalem, millions of martyrs!" and "God bless you Sinwar!"

The mass protests are perhaps Hamas' last chance to break a border blockade enforced by Israel and Egypt since 2007, without having to succumb to demands that it disarm. The blockade has made it increasingly difficult for Hamas to govern. It has also devastated Gaza's economy, made it virtually impossible for people to enter and exit the territory, and left residents with just a few hours of electricity a day.

Israel argues that Hamas could have ended the suffering of Gaza's 2 million people by disarming and renouncing violence.

Friday's marches began before Muslim noon prayers when thousands of Palestinians streamed to five tent encampments that organizers had set up several hundred meters from the border fence.

In one camp near the border community of Khuzaa, smaller groups of activists moved closer to the fence after the prayers. Demonstrators torched large piles of tires, engulfing the area in black smoke meant to shield them from Israeli snipers; the faces of some of the activists were covered in black soot.

Israeli troops on the other side of the fence responded with live fire, tear gas, rubber-coated steel pellets and water cannons.

After the first tires started burning, several young men with gunshot wounds began arriving at a field clinic at the camp.

Mohammed Ashour, 20, who had been among the first to set tires on fire, was shot in the right arm.

"We came here because we want dignity," he said resting on a stretcher before paramedics transported him to the strip's main hospital.

Yehia Abu Daqqa, a 20-year-old student, said he had come to honor those killed in previous protests.

"Yes, there is fear," he said of the risks of advancing toward the fence. "We are here to tell the occupation that we are not weak."

The death toll since last week includes the 22 protesters killed during the Friday protests at the border, as well as one killed during a protest on Tuesday.

The six other deaths include three Palestinian gunmen killed in what Israel said were attempts to attack the border fence and three men who were struck by Israeli tank fire.

More than 1,000 people suffered a range of injuries on Friday, including those hit by live fire and those overcome by tear gas, the Gaza health ministry said. Twelve women and 48 minors were among those hurt, the officials said.

A White House envoy urged Palestinians to stay away from the fence. Jason Greenblatt said the United States condemns "leaders and protesters who call for violence or who send protesters — including children — to the fence, knowing that they may be injured or killed."

Hamas has billed the final protest, set for May 15, as the "Great March of Return" of Palestinian refugees and their descendants, implying they would try to enter Israel. Two-thirds of Gaza's residents are descendants of refugees.

Palestinians commemorate May 15 as their "nakba," or catastrophe, when hundreds of thousands were uprooted from homes in what is now Israel.