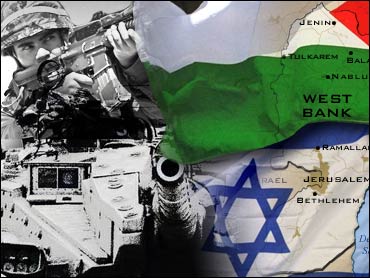 One container blew up when it was hit by army fire.

Israeli forces have in the past intercepted arms shipments, which had been lowered into the sea and were to have been picked up by Palestinian fishing boats, the Israeli military said.

In January, Israeli commandos seized a ship, the Karine A, carrying 50 tons of munitions and watertight containers for floating the arms ashore. The ship was seized in the Red Sea but was to have sailed through the Suez Canal and the containers were to have been lowered into the water off Gaza, the Palestinian captain later told reporters. The arms were from Iran and were to have been delivered to the Palestinian Authority, he said.

Late Tuesday, Palestinians fired a mortar shell at a home in a Jewish settlement in Gaza and hit the top floor, the military said. The family in the house was unhurt.

The shelling caused the postponement of a meeting planned for Wednesday between Israeli Defense Minister Binyamin Ben-Eliezer and the Palestinian security chief, Interior Minister Abdel Razak Yehiyeh, to discuss the next stages of the deal, Palestinian officials said.

"The defense minister has made it clear to the Palestinians that he expects from them vigorous action to halt terrorism and violence, as well as smuggling by sea and on land," a ministry statement said. It added, however, that Ben-Eliezer "intends to continue" with the security agreement.

The sources said the redeployment near Jewish settlements, Israeli military checkpoints and border areas was being coordinated with the Israeli army following a deal reached last week for easing Israel's military clampdown.

Palestinian police and security men started moving back to their old positions on Wednesday under a still-shaky agreement in which Israel was to loosen its grip and the Palestinians were to take responsibility for reining in militant violence.

Also Wednesday, U.S. Deputy Assistant Secretary of State David Satterfield arrived in the West Bank to discuss reform of Palestinian civil society, security cooperation between Israel and the Palestinians and an eventual return to direct peace talks, a U.S. diplomat said on condition of anonymity.

Palestinian Cabinet Minister Saeb Erekat confirmed that he met with Satterfield Wednesday morning in the West Bank town of Jericho. He said he told the U.S. envoy that Israel must end its occupation of Palestinian territories.

Palestinians charge Israel is stalling implementation of a plan to gradually withdraw troops from Palestinian areas as a way of easing tensions after nearly two years of fighting. Israel counters that the Palestinians have yet to take steps to stop attacks.

On Aug. 18, Ben-Eliezer and Yehiyeh reached an agreement to use Gaza and the West Bank town of Bethlehem as test cases: If Palestinians could prevent attacks on Israelis originating there, Israel would ease restrictions in other parts of the West Bank.

Israel's government, meanwhile, was divided over a Palestinian proposal to convene the Palestinian parliament to approve a new Cabinet and set a date for elections.

The Palestinians have tentatively set parliamentary and presidential elections for January.

The United States wants the Palestinians to hold parliamentary elections first, have parliament choose a prime minister and only then prepare for a presidential vote, said a senior Palestinian official who spoke on condition of anonymity.

The Palestinian Cabinet said it would ask Israel to allow the parliament to convene in special session to approve the elections and discuss reforms. That would require Israeli permission because of travel restrictions imposed on the Palestinians during the current violence.

The Israeli Foreign Ministry said that in talks with Peres, Palestinians had raised the issue of convening their parliament, and "Israel would respond favorably to such a request once it is put forward."

Asked about the security agreement, Peres told Israel radio that he has seen "a certain drop in terrorist attacks" and "a certain increase in (Palestinian Authority) efforts to arrest people" involved in terrorism.

"I'm not saying that ... everything is in order, far from it. But we have an interest in turning every crack of opportunity into an open door," he said, adding, "We are looking for ways to ease the situation."