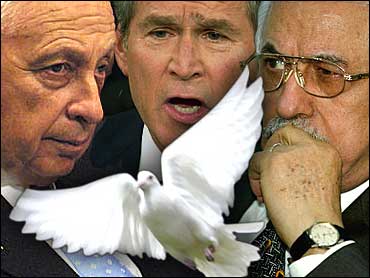 Israel may include a few dozen jailed Islamic militants along with several hundred other Palestinian prisoners being released, an Israeli newspaper reported Friday, and the number could grow.

The move could give a critical boost to lagging peace efforts, said the Haaretz newspaper.

The Israeli and Palestinian prime ministers are both going, separately, to Washington for meetings with President Bush before the end of the month, although it's not known if Abbas will remain in town long enough to meet with Sharon or with both Sharon and Bush.

"Next week is going to be a very, very intensive political week," Shalom told The New York Times. "I'm very encouraged, I must tell you, much more than I was before" about the new Palestinian leadership, he added.

The release of prisoners is not directly called for in the internationally backed "road map" for Mideast peace, but it has become the first big sticking point for the plan, which aims to end nearly three years of fighting, settle the generations-old conflict and create a Palestinian state by 2005.

The Palestinians want Israel to release thousands of prisoners, but Israel has so far agreed to free only a few hundred, and previously has said it will not consider Hamas or Islamic Jihad militants for release.

A change in that position could ease militants' demands and bolster street support for Abbas, who has been criticized by his own people for not being tough enough in renewed talks with the Israelis.

Among a list of 400 prisoners Israel is considering releasing are as many as 60 from Hamas and Islamic Jihad, which have dispatched scores of suicide bombers and gunmen to attack Israelis, Haaretz reported. However, the number could grow as the Shin Bet security service clears more for release.

An adviser to Sharon said the government seemed to be moving in that direction, but he stopped short of confirming the report.

"What you see in the press may give an indication of the direction things are taking, but there's nothing definite," said the adviser, Zalman Shoval. He added that a decision on the prisoner release would likely be made before Sharon visits Washington on July 29.

If Israel does decide to release members of the two main Islamic militant groups, Shoval said, they would be from among those Palestinians held in detention without charge or trial, not those who've been convicted of involvement in terrorist attacks. Those convicted of less direct roles in violence could also be freed, Shoval said.

Hamas — which declared a temporary cease-fire last month along with Islamic Jihad and Yasser Arafat's Fatah faction — wants all prisoners freed. The militants have warned their truce will collapse unless Israel complies.

Hamas official Ismail Abu Shanab said priority for release should go to those serving out longer prison sentences, not to those held in detention, and he said he hoped all prisoners would be released before the three-month cease-fire expires.

"I'm afraid that the Israelis will lose the chance which is now in hand," Abu Shanab said.

Israel is holding more than 7,700 Palestinians in custody, according to the International Committee of the Red Cross. Of those, nearly 1,000 are held without charges or trial, on the grounds they pose a security risk.

A newspaper poll published Friday showed half of Israelis approved of freeing Palestinian prisoners who hadn't been directly involved in attacks. But only 40 percent said they supported releasing members of Hamas and Islamic Jihad.

The New Wave survey in the Maariv newspaper questioned 600 adults this week and had a margin of error of plus or minus 4 percentage points.

Meanwhile, in the West Bank on Friday, Israeli soldiers used explosives to blow up two homes belonging to the families of two Palestinians arrested this week for allegedly kidnapping an Israeli taxi driver.

The driver was snatched from his cab at knifepoint last Friday and held for four days, mostly in a 10 meter (30 foot) deep cellar pit. Israeli commandos rescued him before dawn on Wednesday and arrested five captors.

Just outside the West Bank town of Ramallah, troops destroyed the family homes of the two Palestinians thought to have led the kidnapping, the military said.

A relative of one of the men stood among broken concrete and mangled furniture, screaming: "They made us suffer too much. Oh my God. Where shall we stay, on the streets?

"This oppression is too much," she said.

Israel's army routinely destroys homes belonging to the families of suicide bombers and others involved in attacks, a policy intended to deter other would-be attackers.

Violence has markedly decreased since militant groups declared their cease-fire on June 29 and Israeli troops pulled back from parts of the Gaza Strip and the West Bank town of Bethlehem.

None of the cab driver's kidnappers was linked to the main militant groups.

Sporadic attacks, mainly by rogue militants refusing to join the cease-fire, have continued. On Friday, several gunshots hit a car driven by an Israeli in the northern West Bank, an army spokesman said. The driver was not injured.

Despite the relative lull in fighting, progress on the road map, being pushed strongly by the United States, has stalled over what the next step should be.

The Israelis want the Palestinians to disarm militants, something Abbas has said he prefers to do through negotiations rather than confrontation.

Palestinian Information Minister Nabil Amr said Friday that Abbas and Sharon would meet Sunday, with Abbas stressing the need for more prisoner releases and for lifting of travel restrictions on Arafat. Israeli officials could not immediately be reached for comment.

Sharon is to travel to Washington on June 29, shortly after Abbas' visit. Amr said the two men would not meet in Washington or hold joint talks with President Bush.