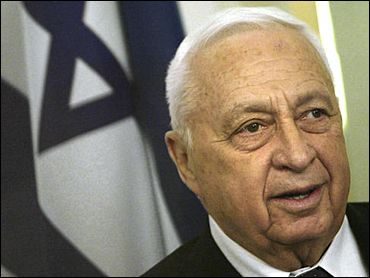 Ministers voted 14-9 to authorize the release, reversing government resistance to freeing members of Hamas and Islamic Jihad. The two groups are responsible for most of the suicide bombings that have killed hundreds of Israelis in three years of violence.

The Cabinet voted hours before Sharon left for Washington for talks Tuesday with Mr. Bush, who is pushing both Palestinians and Israel for quicker progress on the "road map" peace plan to end violence and create a Palestinian state by 2005.

The Palestinians have been calling for a mass release of Palestinian prisoners, arguing that at least 3,000 of the 7,700 in Israeli jails present no security risk. Israel, however, has moved cautiously, agreeing to release only a few hundred and refusing to free anyone directly involved in attacks on Israelis.

The prisoners to be released under Sunday's vote are not considered dangerous by the Israeli government.

"In my opinion, the risk is relatively low," Defense Minister Shaul Mofaz told Israeli Channel 2 television. "We are not releasing murderers with blood on their hands."

Palestinian Information Minister Nabil Amr said the move could be considered a step forward in the peace process if followed by other steps, but he said the releases announced on Sunday were not sufficient.

"The Israeli side has to understand that releasing a hundred or few hundred out of thousands of Palestinian prisoners is not enough if they stop at that point," he said.

Israel has also pledged to withdraw from two additional West Bank towns, and on Sunday dismantled three roadblocks. At a roadblock outside Ramallah, a crowd of Palestinians cheered as an Israeli bulldozer cleared huge cement blocks from the road.

The Israeli army also released a tally of the restrictions on Palestinians' movement that have been lifted recently.

Government spokesman Avi Pazner said the steps would demonstrate to Bush Israel's determination to move ahead with the peace plan. He added, however, that Sharon would make the argument that the next step was up to the Palestinians.

"We have now carried out all our commitments under the road map - all of them," Pazner said. "Now we expect the Palestinians to carry out their part."

The road map calls for other Israeli moves — such as a complete freeze on construction in Jewish settlements in the West Bank and Gaza and a dismantling of all the outposts erected throughout the West Bank since 2001. Israel is also supposed to gradually withdraw from all the autonomous areas is has seized.

Sharon's position is that taking any further steps is too risky while Israel still faces the threat of attack — meaning that first the Palestinians must disarms militant groups, as also called for in the road map.

The Palestinians argue that for them to confront the militants the Abbas government must be stronger, a goal served if ordinary Palestinians see more progress on the ground.

After his meeting with Bush, Abbas received a strongly worded endorsement. Abbas and members of his government said they were encouraged by the warm reception, and some of them said privately that it appeared Mr. Bush accepted their position that the militants could be disarmed by persuasion and not force.

In his meeting with Bush, Sharon is also expected to defend Israel's case for construction of a security fence near the dividing line with the West Bank. Mr. Bush believes the wall is a unilateral and political border and construction should stop; but Sharon will maintain it is necessary to keep suicide bombers out of Israel, reports CBS News Correspondent Robert Berger.

Mr. Bush voiced criticism of the security barrier in comments after talks with Abbas on Friday, saying that it hindered efforts to build confidence between Israelis and Palestinians, who have demanded that construction stop and the completed parts be torn down.

In an interview with the Al-Hayat newspaper on Sunday, Abbas said he told Mr. Bush that if Israel builds the security barrier, the Palestinians will not be able to establish a state. "I am sure that he will use all his capabilities to convince the Israeli side that this step is a mistake and has a negative effect on the peace process," Abbas was quoted as saying.

The issue of Israeli troop pullbacks is also expected to come up in the Sharon-Bush meeting.

Israel has pulled only out of parts of the Gaza Strip and from the West Bank town of Bethlehem since Hamas, Islamic Jihad and Palestinian leader Yasser Arafat's Fatah movement declared a unilateral cease-fire on June 29, bringing a sharp drop in violence after 33 months of fighting.

But the militants say they will call off the truce unless Israel acts, especially on the prisoner issue.

Hamas spokesman Abdel Aziz Rantisi said after the vote that Israel was not doing enough. "We want the release of all the prisoners," he said. "This is one of the conditions of the cease fire declared." He said Hamas was still committed to its cease-fire, "but our patience is limited."