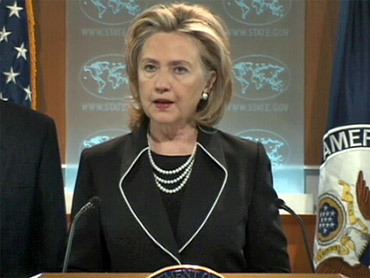 Israel and the Palestinians will resume long-stalled direct peace talks in Washington early next month with the aim of reaching a settlement in a year's time, Secretary of State Hillary Rodham Clinton said Friday.

The breakthrough after a nearly two-year hiatus in face-to-face negotiations marks a small but important step forward in the Obama administration's efforts to ease tensions in the Middle East. It brings the two sides back to the point where they were when the last direct talks began in November 2007 during the Bush administration.

Making the announcement at the State Department with special Mideast peace envoy George Mitchell at her side, Clinton acknowledged that, as in previous negotiations to create an independent Palestinian state, the process would be rocky. But she urged the two sides to be patient.

"There have been difficulties in the past, there will be difficulties ahead," she said. "Without a doubt, we will hit more obstacles. The enemies of peace will keep trying to defeat us and to derail these talks. But I ask the parties to persevere, to keep moving forward even through difficult times, and to continue working to achieve a just and lasting peace in the region."

Analysis: How Are These Mideast Talks Different?

Under the agreement reached after months of painstaking shuttle diplomacy by Mitchell, President Barack Obama will hold separate discussions with Israeli Prime Minister Benjamin Netanyahu and Palestinian President Mahmoud Abbas on Sept. 1 and then host a dinner for the pair.

Egypt's President Hosni Mubarak and Jordan's King Abdullah II, whose countries have peace deals with Israel and will play a crucial support role in the upcoming talks, will also attend as will former British Prime Minister Tony Blair, the special representative of the "Quartet" of Mideast peacemakers - the U.S., the U.N., the European Union and Russia.

On Sept. 2, Clinton will bring Abbas and Netanyahu together for the first formal round of direct talks since they broke down in December 2008. At that point the parties will decide where and when to hold later rounds as well as lay out the parameters for the talks. U.S. officials have said later rounds are likely to be held in Egypt.

Predicting a tough slog ahead in dealing with thorny issues such as borders, the fate of Palestinian refugees and the status of Jerusalem, Clinton called on the two sides to demonstrate "good faith and a commitment" to the success of the talks.

Mitchell said the United States would step in to offer proposals to bridge gaps "as necessary and appropriate." "We will be active participants," he said.

In a choreographed sequence of events, Clinton's announcement came as the Quartet simultaneously issued a statement backing direct talks that "lead to a settlement, negotiated between the parties, that ends the occupation which began in 1967 and results in the emergence of an independent, democratic and viable Palestinian state living side by side in peace and security with Israel and its other neighbors."

"Reaching an agreement is a difficult challenge but is possible," it said. "We are coming to the talks with a genuine desire to reach a peace agreement between the two peoples that will protect Israel's national security interests, foremost of which is security."

The Obama administration has been pushing for a speedy resumption of the face-to-face negotiations that broke down in December 2008. The Palestinians had been balking at direct talks until Israel froze the construction of Jewish settlements, and the Quartet in its invitation to talks reaffirmed a March statement demanding an end to such activity.

But Israel has rejected that, saying it amounted to placing conditions on the negotiations, and has been demanding a separate invitation from the U.S. A temporary freeze on Israeli settlement activity in the West Bank is to expire on Sept. 26.