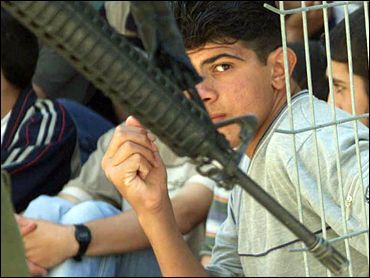 Israeli Defense Minister Binyamin Ben-Eliezer expressed regret on Thursday for the Israeli army's killing of four members of a Palestinian family in a tank raid on a Gaza Strip village.

The Israeli defense ministry said in a statement that Ben-Eliezer had ordered the army to "present him forthwith with its findings on the incident and conclusions for the future. Defense Minister Binyamin Ben-Eliezer expresses regret at the incident in which Palestinian innocents in the Gaza Strip were killed as a result of Israeli army fire."

An Israeli military source said earlier the army's pre-dawn assault on the coastal village of Sheikh Ijleen was spurred by "suspicious movements of a number of people" in an area barred to Palestinians near the Jewish settlement of Netzarim. "Soldiers fired at them," the source said.

"Members of one family were killed in cold blood," said senior Hamas leader Mahmoud al-Zahar, vowing revenge as he stood beside the bodies of the dead in the morgue of Gaza's main hospital. "When there are killings of Palestinian civilians, Israel can expect killings of its civilians."

Hamas is one of the main Islamic militant groups which has been behind the wave of suicide bombings on Israeli targets during the 23-month-old Palestinian uprising against Israeli occupation.

The raids on Sheikh Ijleen, south of Gaza City, coupled with Israel's cancellation of security talks with the Palestinians on Wednesday, strained fragile high-level dialogue in pursuit of a step-by-step truce after 23 months of violence.

"Israeli tanks rolled into our area, firing everywhere, and one house was hit by at least four shells," said Rami Shamalakh, a neighbor of the family reported to have come under fire.

Hospital officials said four people had been killed from the al-Hajeen family, including Ruwaida, 55, and her two sons, Ashraf, 23, and Nihad, 17. The fourth person killed was a cousin of the family, Mohammed, 20.

"A whole family has been eliminated," whispered one shocked relative in the blood-spattered reception area of Gaza City's Shifa hospital where the dead were brought in on stretchers.

Israel on Wednesday called off security talks that had been planned with Palestinian Interior Minister Abdel-Razzak al-Yahya, citing a mortar attack on a Jewish settlement in Gaza the previous night.

The two were to discuss how to firm up security measures agreed a week ago to foster a gradual ceasefire. So far, Israeli troops have vacated the West Bank city of Bethlehem but have yet to relax restrictions on civilian movement in the Gaza Strip.

The Israeli army continues to apply curfews and closures in six West Bank cities and nearby towns that had been under Palestinian administration since interim peace deals in 1994-95.

In the West Bank overnight, Israeli troops searched a Palestinian industrial area near Jenin, blowing open doors of businesses with explosives, witnesses said. Israeli military sources said only that "an operation" was going on.

Jenin is one of six West Bank cities and surrounding areas under an Israeli army clampdown since June following a series of Palestinian suicide bombings in an uprising for independence.

An army spokesman said 12 Palestinian militant suspects were rounded up overnight in the West Bank and two in Gaza.

Sheikh Ijleen, on Gaza's Mediterranean seashore, is close to the fortified settlement of Netzarim.

Israeli forces struck by sea, land and air in the area on Tuesday in what security sources called an attempt to thwart an arms smuggling operation using barrels floating offshore.

Israeli media said that upon examination the containers were apparently refrigerators, not arms caches. Military sources said the containers sank and it was not clear what was inside them.

The Gaza raids coincided with a visit by U.S. Deputy Assistant Secretary of State David Satterfield, the first time in weeks that a U.S. envoy has met Israeli and Palestinian officials in the region to discuss ways to restore calm.

In keeping with Washington's decision to shun Palestinian President Yasser Arafat, Satterfield had no plans to meet the Palestinian leader, U.S. sources said. He is due to meet Israeli officials on Thursday.

At least 1,516 Palestinians and 589 Israelis have been killed since the uprising began after peace talks focusing on terms for a Palestinian state in the West Bank and Gaza stalled.