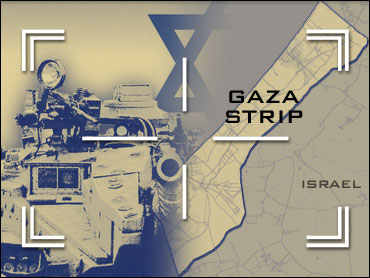 A column of 30 Israeli tanks backed by helicopters thrust into the Palestinian-ruled part of the Gaza Strip with heavy machineguns blazing early on Wednesday and advanced to the edge of a refugee camp outside Gaza City, witnesses said.

Tanks were firing shells and machine gunfire at houses and two helicopters were flying low overhead, they said, prompting hospitals to go on alert for possible casualties, residents said.

The incursion followed a renewal of high-level Israeli-Palestinian talks and an announcement that U.S. Secretary of State Colin Powell would meet a Palestinian delegation later this week.

"They are firing their machine guns and many of the bullets have hit my house," Jawad Abu Samra, a 42-year-old teacher, said by telephone from under his bed, where he was seeking shelter. "My wife has taken my three children down to my brother's house," he said. "We are scared."

Jabaliya is a hotbed for militants from Hamas, as well as other militias which have carried out attacks on Israelis during the past 22 months of fighting.

Earlier, Israeli helicopter gunships killed two Palestinian militants, including one wanted for a suicide bombing last month, as they were returning to a West Bank cave where they had been hiding from Israeli forces.

Israel had been hunting for one of the militants, Ali Adjuri, for weeks. It believes he masterminded a suicide bombing in a foreign workers district of Tel Aviv on July 17 that killed five people, including a Romanian and two Chinese workers.

Residents of the nearby Jab'a village said they saw a helicopter swoop through the air and later heard gunfire on a hill near the northern West Bank village. The bodies of the two militants were found early on Tuesday.

Prior to this, Israel and the Palestinians held their first high-level security talks in months to discuss ways to end 22 months of violence in which more than 2,000 people have been killed.

Despite the meeting, Israel launched a helicopter missile attack late on Monday against a metal foundry it said produced weapons in the Gaza Strip, setting the workshop ablaze and wounding two people.

Monday night's helicopter attack on the workshop in Gaza was the first since Israel assassinated the military commander of the militant Hamas group on July 22 in an air raid that also killed 14 other Palestinians, including nine children.

During discussions, Ben-Eliezer offered to ease some restrictions on Palestinians in the Gaza Strip in a trial gesture to restore security cooperation and ease hardships on Palestinians, his office said.

The Palestinians swiftly rejected the "Gaza First" plan as a "public relations game," indicating there had been no major breakthrough at the talks late on Monday.

"It is totally rejected," said Ahmed Abdel-Rahman, an aide to Arafat. "It does not express anything but the lack of seriousness by Israel to put an end to the comprehensive aggression and the comprehensive siege."

Eight Palestinians have died in the latest violence, including the bus bomber, a gunman who opened fire on Israelis in East Jerusalem, a suspected militant who Israel said was killed by his own bomb and the two men killed on Tuesday.

Israel has responded to the militant attacks by declaring a travel ban on Palestinians in much of the West Bank and blocking the southern Gaza city of Rafah with tanks.

At least 1,484 Palestinians and 585 Israelis have been killed since the Palestinians began an uprising against Israeli occupation in September 2000 shortly after negotiations for a final peace treaty deadlocked.

At the United Nations Monday night, the General Assembly called for Israel to withdraw from the seven West Bank cities and end the "dire humanitarian situation" facing Palestinians.

The U.N. resolution followed a report by a joint Palestinian-international study, funded by CARE International and the U.S. Agency for International Development (USAID), which found that one in five young Palestinian children is suffering from malnutrition.

"We must ease economic conditions for the Palestinians," Israeli Foreign Minister Shimon Peres told Israel's Army radio. "Without the Palestinians it will be very hard to fight terror."