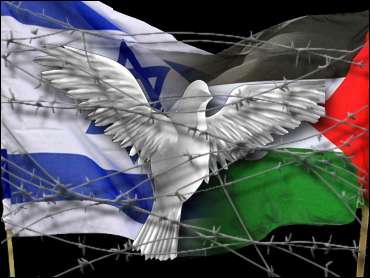 Israeli forces would withdraw on the condition "the Palestinian side takes responsibility to calm the security situation and reduce violence," the Defense Ministry said in a statement.

The troops were to start withdrawing Monday, the statement said.

The planned withdrawal will mark the first time in months that negotiations between the two sides have prospered.

In a meeting that lasted three hours, Israeli Defense Minister Binyamin Ben-Eliezer met with senior Palestinian security officials in Tel Aviv to discuss the plan, under which Israeli troops in Bethlehem and parts of the Gaza Strip would redeploy from Palestinian areas.

"The talks are aimed at getting a cease-fire and reducing tension," Ben-Eliezer told Israeli army radio, prior to the meeting.

Ben-Eliezer told a Cabinet meeting that the number of Palestinian attacks against Israelis had decreased over the past week. But he ascribed the drop to army operations and said there was no decline in Palestinian attempts to strike military and civilian targets.

Prime Minister Ariel Sharon told the same meeting that it was in Israel's interest to reach a political agreement with the Palestinians that would lead to genuine peace, but there would be no let up in "activity against terrorist leaders," according to a statement from his office.

The withdrawal plan is meant as a pilot scheme, whereby Palestinian forces would retake security control of areas vacated by the Israeli troops, and will work to prevent attacks on Israelis. If the attacks stop in Gaza and other areas where the Israeli troops withdraw, then it will be gradually extended throughout areas that are supposed to be under the control of the Palestinian Authority.

The Defense Ministry said that during the meeting Ben-Eliezer ordered the army to allow the passage of medical and humanitarian traffic in Palestinian areas with the minimum delay possible.

At a separate meeting, Foreign Minister Shimon Peres told Bertini that Israel is "fighting terrorism and not the Palestinian people," a ministry statement said.

Bertini noted that sometimes Israeli government policy toward the Palestinians was not always carried out by security forces on the ground, the ministry statement added.

Israel has imposed curfews and sent troops into West Bank Palestinian towns and cities to stop militants from entering Israel and launching attacks, including suicide bombings.

Palestinians trapped in their homes for days at a time call it collective punishment that has devastated the Palestinian economy. The incursions have been accompanied by roundups of Palestinian suspects.

Palestinian prisoners' organizations estimate that Israeli is currently holding about 3,500 Palestinians who have been arrested since the outbreak of violence in September 2000. About 900 are being held under military regulations that allow for indefinite detention without trial, according to Israeli human rights group B'Tselem.

The army said that as of August 4, the latest date for which figures have been collated, a total of 2,600 Palestinians were being held in military installations.

In addition, an unspecified number are in the custody of the civilian prisons service and the Shin Bet security service.

Israeli human rights group Adalah said that the Supreme Court on Sunday granted a temporary injunction prohibiting the army from using what it calls "the neighbor procedure" in which Palestinian civilians are ordered to knock on the doors of houses slated for search and arrest operations.

The army took widespread criticism at home and abroad last week after soldiers forced a Palestinian teen-ager to approach the house of a Palestinian militant to tell him to surrender. The youth, Nidal Daraghmeh, 19, was shot and killed, though it was unclear who opened fire.

A court official was unable to confirm or deny that such an injunction was issued.

Meanwhile, a former treasurer of the Palestine Liberation Organization, who fled to London last week, accused Yasser Arafat of transferring millions of dollars of international donations into a personal account, according to interviews published Sunday in Israeli newspapers.

The ex-treasurer, Jawad Ghussein, 71, alleged that Arafat moved up to $8 million to his personal account every month and was aware of the widespread corruption, the newspaper accounts said.

In interviews from London, Ghussein spoke to Haaretz and Yediot Ahronot, two leading Israeli dailies. Ghussein claimed he had documents to support his claims, though none were cited in the newspaper articles. The reports did not say over what years the alleged transfers took place.

Attempts to reach Ghussein in London were unsuccessful.

Palestinian Information Minister Yasser Abed Rabbo denied the allegations and called Ghussein a "thief" who had stolen $6.5 million from the PLO. He was under house arrest on theft charges, and managed to flee while receiving medical treatment, Abed Rabbo said. Ghussein denied the theft charge.

Ghussein's allegations come amid international pressure on Arafat and the Palestinian Authority to reform a leadership that has been accused of rampant corruption since it was established in 1994.