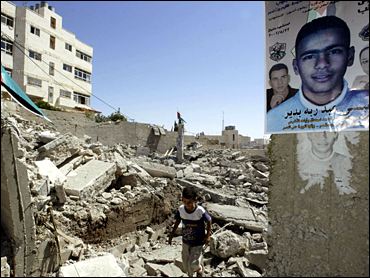 A court spokeswoman said Supreme Court Justice Dalia Dorner had issued a temporary injunction against the expulsion order handed down by an Israeli military tribunal. The government 15 days to explain why it should allow the expulsion order to be carried out.

CBS News Correspondent Kimberly Dozier reports the court wants the army to present more evidence proving these people could have done something to stop the violence.

Moshe Negbi, an Israeli legal analyst, said the temporary injunction signaled that "the court does see legal difficulties for Israel," and possibly action against the state in the international criminal court, if the expulsions are carried out.

The tribunal's move was aimed at deterring suicide bombers by punishing their families but was condemned by human rights activists as collective punishment they said would undermine efforts to end 22 months of bloodshed in a Palestinian uprising.

The Israeli military expects the court will ultimately let the deportations stand. It believes these actions, coupled with the new tactic of demolishing the family homes of suicide bombers, will give Palestinians a very personal reason to stop attacks against Israel.

Israel's Justice Ministry said Tuesday it would indict Marwan Barghouthi, a popular leader of the Palestinian uprising, on charges linked to militant violence including "incitement to murder." He is the second most popular Palestinian leader, trailing only Arafat, according to recent polls.

In the Gaza Strip, meanwhile, a spokesman for the Islamic militant group Hamas said it reserved the right to continue bombings and shooting attacks on Israelis, signaling the failure of talks among Palestinian factions on stopping attacks.

Last month, Israel began targeting the families of Palestinian assailants in hopes of deterring future attacks. Since mid-July, troops have demolished 20 homes of attackers, including two buildings that were destroyed early Tuesday.

Barghouthi, general secretary of Palestinian President Yasser Arafat's Fatah movement in the West Bank, has been in detention since Israeli troops arrested him on April 15.

Among the charges, to be filed on Wednesday, will be that he is head of Fatah's military wing, the Al-Aqsa Martyrs Brigades.

The charges will also say he was "a central participant in decision-making which in the past two years perpetrated dozens of attacks in which dozens of Israeli citizens lost their lives and many hundreds were wounded," a ministry statement said.

Through his attorney, he is telling news services he is a political leader and leader of an uprising, but responsible for the violence.

By placing Barghouti on trial in the Tel Aviv District Court, Israel will be looking to show that the senior levels of the Palestinian leadership were behind shootings and bombings. But the tactic could backfire, further burnishing Barghouti's image as a resistance figure and increasing his already strong popularity among Palestinians.

"This is a golden opportunity to try the (Israeli) occupation for all the crimes committed against the Palestinian people, and to present the resistance movement as a just movement before the Israeli public and the international community," Khader Shkirat said.

Palestinian leader Yasser Arafat, commenting on the expulsions, said "it is a crime that cannot be accepted, that is against international and humanitarian law."

An Israeli Foreign Ministry official, Mark Sofer, said Israel had no choice. "The huge suicide attacks we faced here in Israel over the past few weeks and months forced us to take unusual measures that we had preferred to avoid," he said.

Such measures "are not only immoral and cruel and violate the Geneva Conventions, but they will bring about the opposite result, the creation of more suicide bombers," said Dan Yakir, head of the Israeli Civil Rights Association.

The houses destroyed Tuesday were in the town of Dahariya and the village of Doha, both in the southern West Bank. The Dahariya house belonged to a Palestinian suspected of firing on soldiers in the southern city of Beersheva, killing two. The Doha house belonged to a suicide bomber who blew himself up in May in Rishon Letzion, a city south of Tel Aviv, killing two bystanders, the military said.

In Doha, troops detonated explosives in a huge blast that sent sparks showering into the night sky. The occupants of the house stood nearby watching. Relatives helped support one woman to prevent her from falling as she cried.

Nabil Abu Rdeneh, a senior aide to Arafat, called for international intervention to stop the expulsions. "This will not help calm the situation," Abu Rdeneh said. "The results of such a step will be the destruction of international and Arab efforts to help the peace in the region."

The three Palestinians are Intisar and Kifah Ajouri, sister and brother of Ali Ajouri, who was accused of handing belts with explosives over to suicide bombers, and Abdel Nasser Asidi, brother of a Hamas activist who is suspected of killing several Israelis.

Under the deportation order, they would be confined to the fenced-in Gaza Strip for two years.

Israel charges that Intisar Ajouri sewed an explosive belt for a suicide bomber. She told the military court that she didn't have anything to do with the bombing and didn't know how to sew.

The Israeli army recently killed Ali Ajouri and demolished the family home in the Askar refugee camp near Nablus.

A ruling by Israel's Supreme Court could break legal ground if it approves the government's decision to expel Palestinians. The government had originally decided to expel 19 relatives in the Ajouri family but Attorney General Elyakim Rubinstein ruled that only those directly involved in attacks can be expelled.

In May, after a siege at the Church of the Nativity in Bethlehem at the end of a large-scale Israeli incursion into the West Bank, 26 Palestinians were taken from Bethlehem to Gaza and 13 others were deported, but this was done under an agreement between Israel and the Palestinian Authority and was not tested in Israeli courts.

Israel has tried in vain to stop a wave of suicide bomb attacks during the two-year Palestinian uprising. More than 250 people have been killed in 75 suicide attacks since the fighting erupted in September 2000.

In Gaza, meanwhile, a Hamas spokesman, Ismail Abu Shanab, said that "the Palestinian people are determined to continue resistance until the end of occupation."

The remarks signaled that recent efforts by Arafat's Fatah movement and other Palestinians to persuade Hamas and the smaller Islamic Jihad group to stop attacks on Israeli civilians have failed.