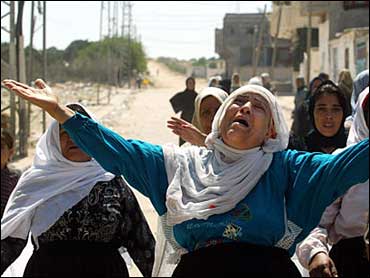 A military court on Monday approved the expulsion of three relatives of suspected Palestinian terrorists from the West Bank to the Gaza Strip, Israel TV reported.

The expulsions would be the first of their kind and a new Israeli tactic aimed at discouraging Palestinians from carrying out attacks. The three Palestinians would have 12 hours to appeal the decision to an Israeli civilian court.

The Israeli Defense Ministry and military refused to comment on the report.

The television report said the three Palestinians are Intisar and Kifah Ajouri, sister and brother of Ali Ajouri, who is accused of handing belts with explosives over to suicide bombers, and Abdel Nasser Asidi, brother of a Hamas activist who is suspected of killing several Israelis.

While the television report said all three had been ordered expelled, Dalia Kerstein, of the human rights group Moked which has been handling the defense of the three, said the military court had only upheld expulsion orders for two.

She said Intisar Ajouri was not on the list.

Kerstein also said the expulsion would not be implemented until 2 p.m. Tuesday to allow time for a civilian appeal.

Israel decided on expulsion of relatives of suspected attackers, including suicide bombers, as a deterrent measure last month, at one point arresting 19 relatives, apparently intending to send them all to Gaza.

However, Attorney General Elyakim Rubinstein ruled that only relatives who were directly connected to the attacks could be punished. Palestinians have denounced the policy as collective punishment.

Also on Monday, Israeli soldiers shot dead a Palestinian militant during house-to-house searches in a village in the northern West Bank.

The incident followed weekend violence in the West Bank and Gaza Strip in which at least four Palestinians and one Israeli were killed, underlining difficulties facing negotiators trying to end almost two years of bloodshed.

Ghasal Israhat, a militant wanted by Israel, was killed by Israeli troops during a raid on the village of al-Yamoun near the West Bank city of Jenin, his family said.

Israhat's family said they were asleep in their beds when soldiers burst into the house overnight and detained Israhat. Shortly afterwards they said they heard gunshots and that the soldiers later told them they had killed the militant.

Israeli military officials said Israhat was shot dead after he climbed down a drainpipe and tried to run away.

They said an initial investigation showed soldiers called on Israhat to stop, fired warning shots into the air and near his legs and finally shot him dead after he failed to halt.

"The operation was intended to arrest him. They came to arrest him and he tried to escape," an Israeli military source said.

Israhat belonged to the al-Aqsa Martyrs Brigades, a militant group linked to Palestinian President Yasser Arafat's Fatah faction that has been behind a spate of suicide bombings and shooting attacks against Israelis.

Troops shot dead two Palestinians in the West Bank on Friday and Saturday.

At least 1,498 Palestinians and 587 Israelis have died since a Palestinian uprising against occupation began in September 2000 after negotiations for a peace treaty deadlocked.