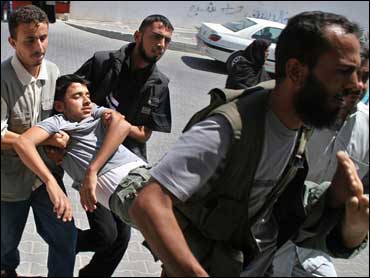 Israeli troops backed by tanks and bulldozers crossed into southern Gaza to strike at Palestinian militants on Thursday, killing 10, a day after Israeli leaders ruled out a large-scale offensive to stop daily rocket salvos from Gaza.

The battle began in the morning and continued for several hours near the southern Gaza city of Khan Younis.

Israel said troops inside Gaza on a "routine" mission opened fire at a group of militants who approached them, sparking an exchange of fire. Four militants were killed. Gaza's Hamas rulers said militants were targeted either by an Israeli tank shell or missile fire. Dr. Moaiya Hassanain of the Palestinian Health Ministry reported shrapnel wounds consistent with shell fire.

Later in the day, Palestinian militants said fighters in a tractor and jeep crashed through the fence on the Gaza-Israel border and attacked an Israeli army post.

The military said the militants were trying to attack a base but were repulsed. Israeli aircraft struck two cars in the area, the army said, apparently the ones that tried to attack the base. Six militants were killed in that encounter, both sides said.

The toll of 10 was the highest in a single day in Gaza since June 27, when 12 were killed in clashes with Israeli forces.

The fighting came as Quartet envoy Tony Blair met with Palestinian President Mahmoud Abbas. The former British prime minister is on his first extended mission since assuming his new role for the Quartet - the United States, United Nations, European Union and Russia. Blair's spokesman would give no details of the meeting. Blair is scheduled to report to the Quartet at the end of the month.

Internal tensions resurfaced in Gaza on Thursday when Hamas charged its rival, Fatah, with trying to re-ignite violence. The Islamic Hamas overran Gaza in June, vanquishing security forces loyal to Fatah and President Mahmoud Abbas. Hundreds of Palestinians were killed in more than a year of infighting.

A Hamas official said Fatah activists confessed to planning to plant explosives during Friday prayers. Fatah officials denied that and charged Hamas with seeking a pretext to crack down on Fatah again.

At the same time, Fatah officials said they would defy a Hamas ban on public prayer on Friday. Recent Muslim prayer gatherings on Friday in Gaza have turned into anti-Hamas riots.

In a speech to party activists late Thursday in Jerusalem, Prime Minister Ehud Olmert drew a link between Thursday's clash and daily rocket attacks by Palestinians from Gaza.

"We will act every day against the terrorists," Olmert said. "This very day many in Gaza paid with their lives because of the (rockets)."

In Gaza, Hamas official Osama Muzini turned down a request by the Red Cross to visit an Israeli soldier captured in a cross-border raid in June 2006. He said allowing a visit might lead Israel to the soldier. The request was made Wednesday by the director-general of the International Committee of the Red Cross during a visit to Gaza.

The clash between Israeli forces and Palestinian militants was south of the main flashpoint in Gaza, the northeast corner of the seaside territory where militants have been launching homemade rockets at nearby Israeli communities just across the border fence.

The daily barrages have wreaked panic among Israel's southern population and led to demands for retaliation.

Israel's Security Cabinet on Wednesday rejected calls for a large-scale Gaza invasion but threatened to cut water, electricity and fuel supplies to Gaza.

However, Defense Minister Ehud Barak told a gathering of top defense officials that "there is recognition that in the end, Israel will have to operate inside the Gaza Strip," participants at the meeting said. They spoke on condition of anonymity because the meeting was closed.

Israel has mounted such operations in the past, with casualties on both sides, but the large-scale military strikes have failed to quell the rocket fire. Israeli military experts have said that short of recapturing all of Gaza, there is no military solution.

Israel withdrew from Gaza in 2005, removing 21 settlements and all its army bases.

Parents in the rocket-scarred Israeli town of Sderot kept their children home again Thursday, demanding better protection. Children have stayed away from school since a rocket exploded next to a nursery school on Monday, the second day of the school year. Israeli media said school would resume Friday.

Also Thursday, a Palestinian policeman was shot dead by gunmen in the northern West Bank town of Jenin. Police said Akram Abu Sba, 40, was shot in the chest by Islamic Jihad militants after he stopped their car for a routine check.