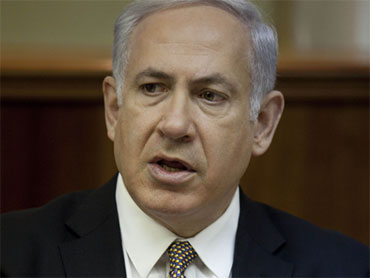 Israel's prime minister spelled out his opening position for the new round of Mideast peace talks set to begin next week, insisting Sunday on key security conditions and saying an agreement would be "difficult but possible."

Netanyahu said a future Palestinian state would have to be demilitarized, recognize Israel as the homeland of the Jewish people and respect Israel's vital security interests. Some of his demands have already been rejected outright by the Palestinians.

"We come to the talks with a genuine desire to reach a peace agreement between the two peoples, while protecting Israel's national interests, chiefly security," Netanyahu told his Cabinet.

His comments were his first since U.S. Secretary of State Hillary Clinton announced Friday that the sides would resume direct talks at a summit in Washington next week.

Analysis: How Are These Mideast Talks Different?
Unplugged: Will Talks Bring Peace to Middle East?

"Achieving a peace agreement between us and the Palestinian Authority is difficult but possible," he said.

"We are talking about a peace agreement between Israel and a demilitarized Palestinian state, and this state, if it is established at the end of the process ... is meant to end the conflict and not to be a foundation for its continuation by other means," Netanyahu said.

He did not elaborate on any additional security demands, but in the past he has said that Israel would have to maintain a presence along the West Bank's border with Jordan to prevent arms smuggling. The Palestinians, who claim all of the West Bank as part of their future state, reject any Israeli presence.

The Palestinians have balked at that demand, saying it could prejudice the rights of Israel's Arab minority and compromise the right of Palestinian refugees to return to homes vacated in the fighting around Israel's establishment in 1948.

The comments indicated just how much work lies ahead for President Barack Obama, who hopes to resolve one of the world's most intractable conflicts within a year.

The Western-backed Palestinian government in the West Bank, wary of engaging with Netanyahu's hard-line government, has resisted entering direct peace talks, which they fear won't be productive. Friday's announcement came after months of American diplomatic efforts to get the sides talking again.

The Palestinians want a commitment from Netanyahu that he allow them to form a state that includes virtually all of the West Bank and east Jerusalem, areas captured in the 1967 Mideast war.

Netanyahu has refused to signal whether he is prepared for a broad withdrawal from the West Bank, and has said that east Jerusalem must remain Israeli.

The new talks could also sharpen the differences in Netanyahu's fractious ruling coalition. Some analysts have suggested they could potentially force the prime minister to change its makeup to exclude some of the more hard-line members in favor of moderates like his rivals from the opposition Kadima party.

"If you start negotiations, unconditional negotiations, one cannot accept a condition that the freeze should continue," Cabinet Minister Uzi Landau of the hard-line Yisrael Beitenu said Sunday.

Another Cabinet minister, Isaac Herzog of the centrist Labor party, hailed the beginning of talks as a "major development" but acknowledge they may have "repercussions on the Israeli political scene."