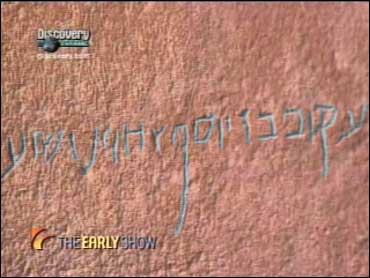 An Israeli antiquities dealer has been arrested on suspicion of forging artifacts linked to Jesus and the biblical Jewish Temple, police said Tuesday.

Dealer Oded Golan was arrested Monday at his home in Tel Aviv, police said, on suspicion of forging and dealing in fake antiquities.

He was brought to a Jerusalem court, where police showed equipment for making forgeries they said was found in his home, including stencils, stones and partially completed forgeries.

The police said Golan was being held at the Jerusalem police lockup on a four-day detention order.

Golan was involved in the discovery of two items that shook the religious and archaeological world -- an ossuary, or burial box, with the inscription, ''James, the brother of Jesus,'' leading to speculation that it referred to the brother of Jesus of Nazareth.

Also, a shoebox-sized tablet was found, inscribed with instructions for caring for the Jewish Temple, in wording similar to that of the Bible. Called the ''Joash inscription,'' it purported to be rare physical evidence backing up the biblical narrative.

However, from the beginning, questions were raised about the authenticity of the two items, and after exhaustive studies, the Israel Antiquities Authority declared last month that they were forgeries.

Golan first showed the ossuary to a French collector last year, saying he owned it. He indicated he also owned the ''Joash inscription'' tablet.

Determining that the ossuary inscription was a fake, the Antiquities Authority said in a statement that the 20-inch by 11-inch burial container was indeed ancient but the inscription wasn't. The telltale sign, it said, was that the letters cut through the patina, a thin coating acquired with age.

"The inscription appears new, written in modernity by someone attempting to reproduce ancient written characters," the statement said.

Uzi Dahari, a member of the committee that studied the burial box, or ossuary, was more condemnatory. The inscription is "a contamination of the archaeological science," he said. "It's breaking my heart to see such things."

Despite the findings, Golan insisted that the artifacts were authentic. Because he was in police custody Tuesday, Golan was not available for comment.