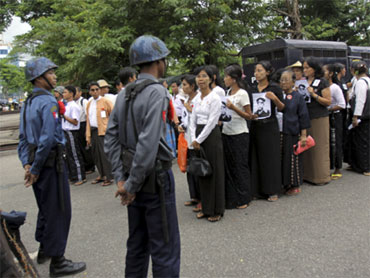 More than 100 Israeli tanks swept into the West Bank city of Nablus amid bursts of gunfire on Friday, searching for bomb factories and wanted militants, and killing three Palestinians, as the military launched a campaign in retaliation for Wednesday's bombing in Jerusalem.

CBS News Correspondent Robert Berger reports the military operation in Nablus is the Israeli army's biggest since six weeks ago, when troops re-occupied most of the West Bank.

Israel says the terrorist cell that was responsible for Wednesday's bomb in the cafeteria of Hebrew University - a blast that killed seven people, including five Americans - is from Nablus.

The bodies of two of the Americans are being flown home on Friday as the FBI begins its own investigation into the bombing, which sparked words of outrage from President Bush.

After vowing harsh retaliation against Hamas for carrying out the bombing, Israel sent columns of tanks deep into the center of Palestinian-ruled Nablus, which had been surrounded and under strict curfew for weeks, witnesses said.

Under cover of darkness, Israeli troops were also deployed in the alleyways of Nablus's Old City, where the army fought Palestinian militants holed up there during a six-week Israeli offensive in the West Bank in April and May.

Palestinian security and hospital sources said Israeli forces killed a Hamas member in his home in a village on the outskirts of Nablus and shot dead two other Palestinian in the centre of the city.

An Israeli army spokeswoman said: "For operational reasons, we have no comment at this time." But Israeli military officials have made no secret of their belief that Nablus remained a stronghold of militants behind attacks on Israelis.

Israeli forces seized control of Nablus and most other West Bank cities and towns following back-to-back suicide bombings in Jerusalem in mid-June, but this was the largest incursion into the city center since the operation began.

The Israeli operation followed Bush's harsh condemnation of Wednesday's bombing an expression of support for Israel's right to defend itself.

"I'm just as angry as Israel is right now," Bush told reporters on Thursday in Washington. "I'm furious that innocent life was lost. However, through my fury, even though I am mad, I still believe peace is possible."

A senior Bush administration official said the Federal Bureau of Investigation (FBI) had opened a probe into the university bombing.

"We are cooperating with Israeli law enforcement authorities in pursuing the investigation," the official said, adding that the FBI would look into "everything concerning the deaths" of the Americans.

In new violence, an Israeli man was found bound and shot dead near Israel's border with the West Bank on Thursday.

The Israeli army accused Palestinian gunmen of shooting the man at close range at the Buds of Peace industrial zone near the West Bank city of Tulkarm after going there to make deliveries.

The Israeli army said troops in the area shot back after Palestinians fired on them. But Israeli military sources said they had received no word from their Palestinian counterparts that a child had been killed.

The deaths of Americans in Wednesday's attack at Hebrew University, one of the few places in Jerusalem where Israelis and Arabs still lived peacefully together, could complicate U.S. attempts to act as an even-handed broker in the conflict.

Hamas, an Islamic movement dedicated to Israel's destruction, said it carried out the attack to avenge an Israeli air strike in Gaza last week that killed its military leader, his lieutenant and 13 others, including nine children.

President Bush gave no indication on whether the United States might retaliate against Hamas. But a Hamas leader was quick to deny that his group had deliberately targeted U.S. citizens.

Friends and relatives of the American victims stood sobbing on the tarmac at Israel's Ben-Gurion airport during a somber ceremony held around midnight before the two caskets were loaded aboard an El Al airliner bound for New York.

The plane carried the bodies of Janis Coulter, 36, a New York-based administrator for Hebrew University, and Benjamin Blutstein, 25, a student from Pennsylvania who was in Israel on a study program for Jewish educators.

The other Americans killed in the bombing are Marla Bennett, 24; David Gritz, 24, who also had French citizenship; and Dina Carter, 37, who also had Israeli citizenship. The two Israeli dead were David Ladovsky, 29, and Levina Shapira, 53.

Wednesday's bombing was the bloodiest in Israel since June 19 when a bomber killed seven Israelis at a Jerusalem bus stop, and was unusual because of the high toll of foreign victims.

It further dented hopes of an early breakthrough to end violence since Palestinians rose up against Israeli occupation in September 2000. At least 1,474 Palestinians and 574 Israelis have been killed in the violence.