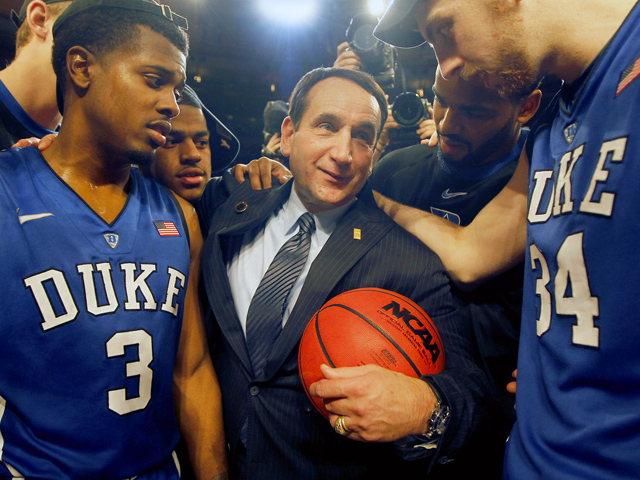 One of the all-time great collegiate coaches, Mike Krzyzewski, gave a lesson in how to lose with grace when his Duke Blue Devils team was bounced this year by 15th seeded Leigh. As Coach K told CBS's Tracy Wolfson, "They played better than we did and deserved to win." He would not accept the excuse that one of his star players, Ryan Kelly, was unavailable to play.

That's classy, and it typifies what we have come to expect from Coach K, who has won the tourney four times but has had his share of heart-breaking loses, too. Commentators always laud Krzyzewski for putting players first, and after his loss we know that includes players on the opposite side.

Krzyzewski also praised the Leigh players who saying they very bold the entire game. "We started the game tentative" and stayed that way, Coach K said. Leigh, he said, was "bold throughout. Bold won."

While I admire Krzyzewski, I am by no means a Dookie nut. In fact, when they play I like to cheer for the other team. But it is impossible to root against a man like Krzyzewski, a graduate of West Point and USA Olympic basketball coach, who epitomizes what it means to win with integrity and lose with dignity.

What Krzyzewski teaches us is that winning is not everything. Victory is meaningful but only when you do it the right way. Sometimes we lose more than we win. Life at work, life at home, is full of disappointments. But we learn to deal with them. Leaders do it on a more public stage.

There is a difference between losing and being a loser. Losing means you came out on the short end, very often after you have given it your best effort. Being a loser means you never really try; you short-cycle yourself into believing you cannot overcome an obstacle and you don't. No surprise.

Effective leaders are those who face adversity with grit and continue to persevere. Most important, they hang with their team. They demonstrate what it means to care by putting the team first. They also follow the advice given by legendary coach Paul Bear Bryant of Alabama who said, "It's not the will to win that matters -- everyone has that. It's the will to prepare to win that matters."

That adage is especially true off the field. Preparation is critical to success. You plan ahead and as a leader you put the right people in the right position to succeed.

But sometimes you do not come out on top, and when you do, you must be gracious enough to acknowledge your limitations.

Victory is not always measured by wins but by the determination that comes from working to win more than you lose. How you handle yourself and your team in defeat will prepare you and them to succeed in the future.

Note: The author would like to credit Dennis Fithian of 97.1 The Ticket in Detroit for the phrase "March Sadness."