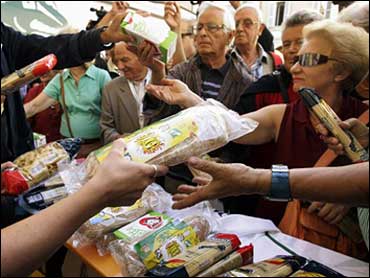 The price of basic commodities are being driven up by middlemen, while farmers and producers earnings remain flat, activists said at protests in Rome, Milan and Palermo.

In Italy, fettuccine, linguini, and spaghetti are up 20 percent and in the U.S., a loaf of bread is up 13 cents, reports CBS News correspondent Cynthia Bowers.

Over the past few years farmers have been planting more corn to take advantage of the demand for ethanol. That means fewer farm fields for soybeans and wheat. So those grains were already in short supply when bad weather crippled the wheat crops in Canada, Australia and Europe. Now there is not enough wheat to go around, reports Bowers. High demand and low inventory adds up to higher prices.

Picking on Italians' staple to draw attention to their cause, consumer groups called the one-day pasta strike Thursday, not against eating it, but against buying it.

In the capital, a few dozen people protested in front of parliament, handing out free pasta, bread and milk to passers-by. Pasta was also handed out in front of the Trade and Competition Antitrust authority to help out those Italians who decided to support the strike.

Consumer groups as well as Italy's farmers association met with the president of the antitrust authority to push for an investigation into the pasta industry, from production to the distribution of the final product.

Since shoppers typically stock up on their pasta, buying multiple packages at a time to always have it on hand, the impact of the strike was mostly symbolic. Few shoppers seemed to give it much notice at all.

"I wasn't aware of the strike, but I do know about the expensive prices," said 34-year-old Emanuela Mafrolla, a consultant and mother shopping in central Rome. "Pasta is a basic dish. How could I possibly give it up?"

At a Roman trattoria, a diner who only identified himself as Giovanni echoed a similar sentiment as he set in to a plate of fettuccine for lunch. "Today is pasta strike and we eat it anyway!"

At Rome's Rebibbia prison, however, inmates were taking part, refraining from buying grain products at the prison shop, the ANSA news agency reported. They were, however, eating pasta and other products provided to them in the prison cafeteria.

The increase in pasta prices is being driven by rising wheat prices worldwide, economists and producers say. The demand for wheat is the result of several trends, chiefly an increasing demand for biofuels, which can be made from wheat, and improved diets in emerging countries where putting more meat on the table is raising the demand for feed for livestock, said Francesco Bertolini, an economist at Milan's Bocconi University.

As a result, wheat stocks worldwide are being depleted to their lowest levels in decades and grain prices are soaring.

Italy produces only about half of the high-protein durum wheat used to make high-quality pasta and bread; the rest is imported from overseas markets including the United States, Canada and Ukraine.

On the Bologna market, for example, the cost of a pound of durum flour has risen in just the last two months from 16 cents to 28 cents. Durum flour makes up 70 percent of the cost of producing pasta.

In the Italian supermarket, that will translate by the end of the year into an increase of 16-19 cents on a 1-pound package, which now typically runs from 83 cents to $1.25, said Furio Bragagnolo, the vice president of the Italian pasta manufacturers association.