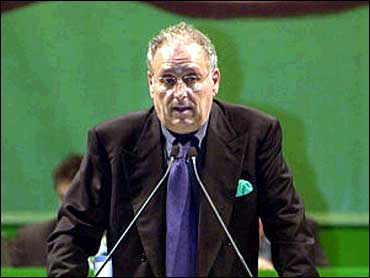 The comments by Stefano Stefani, an Industry Ministry undersecretary responsible for tourism, had caused a diplomatic crisis with Germany and led Chancellor Gerhard Schroeder to cancel his planned vacation to Italy.

"He has express regret because he was only defending Italy and its prime minister," said Pinetti, who would not immediately provide further details.

The comments had embarrassed many in Premier Silvio Berlusconi's government, with some ministers openly distancing themselves. Recently, pressure had been mounting on the premier to remove the official, both at home and from Germany.

Stefani had called Germany a "country intoxicated with arrogant certainties," and Germans "stereotyped blonds with a hyper-nationalist pride" in an article in La Padania, the newspaper of the anti-immigrant, occasionally xenophobic Northern League.

He had also called for an IQ test in Germany, saying it would be "necessary" and "indispensable."

Stefani wrote the piece after the first Italian-German flap played out in the European Parliament last week, when Berlusconi told German lawmaker Martin Schulz that he would make for a "perfect" Nazi prison guard in a movie.

Schulz had asked Berlusconi questions over legislation that critics argue helped the premier in his legal woes.

The comments turned the spotlights on the so-far largely unknown Stefani, a 64-year-old goldsmith-turned-politician whose current post is his highest. Stefani has a German ex-wife and, according to some media reports in Italy and Germany, a passion for German cars.

Schroeder announced earlier this week he was scrapping his planned trip to the Marche region in central Italy, saying he would rest in Hanover instead.

On Friday, he said he would have sacked the official.

"In my government, he wouldn't have survived another hour as a junior minister," he said. "But that's a sovereign decision for the Italian government. I have no intention of interfering."