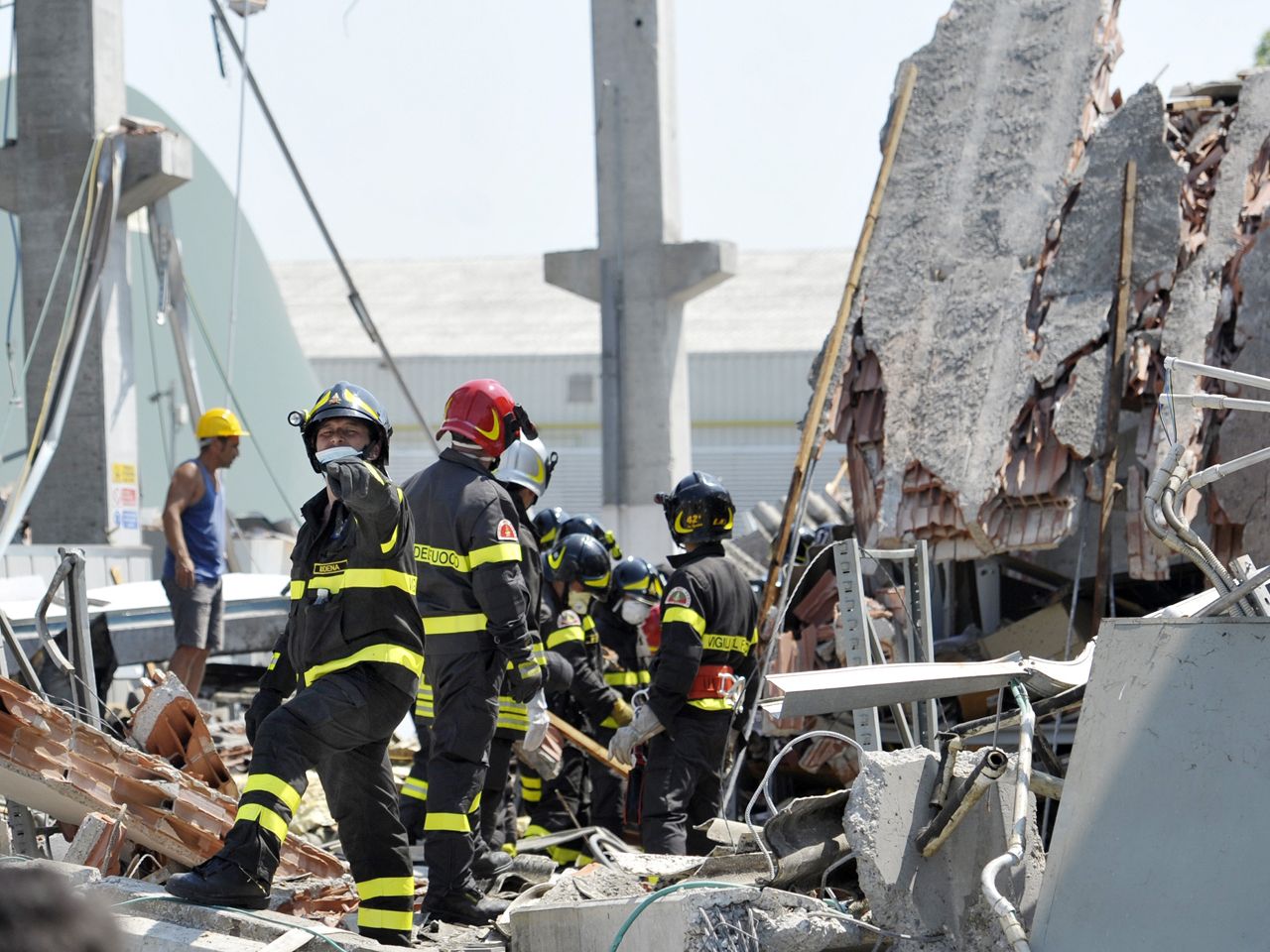 At least three employees at the factory — two immigrants and an Italian engineer checking the building's stability — were among those killed in the second deadly quake in nine days to strike a region of Italy that hadn't considered itself particularly quake prone.

By late Tuesday, the death toll stood at 16, with one person missing : a worker at the machinery factory in the small town of San Felice Sul Panaro. Some 350 people also were injured in the 5.8 magnitude quake north of Bologna in Emilia Romagna, one of Italy's more productive regions, agriculturally and industrially. Originally government officials had put the death toll at 17, and there was no immediately explanation for the lowered toll.

The injured included a 65-year-old woman who was pulled out alive by rescuers after lying for 12 hours in the rubble of her apartment's kitchen in Cavezzo, another town hard hit by the quake. Firefighters told Sky TG24 TV that a piece of furniture, which had toppled over, saved her from being crushed by the wreckage. She was taken to a hospital for treatment.

The building had been damaged in the first quake, on May 20, and had been vacant since. The woman had just gone back inside it Tuesday morning to retrieve some clothes when the latest temblor knocked down the building, firefighters said.

Factories, barns and churches fell, dealing a second blow to a region where thousands remained homeless from the May 20 temblor, much stronger in intensity, at 6.0 magnitude.

CBS News correspondent Mark Phillips says that, in this area about 25 miles north of Bologna, earthquakes are not uncommon, and a lot of old buildings are not built to withstand them. Many of the most beautiful buildings in northern Italy are also the most vulnerable to earthquakes

The two quakes struck one of the most productive regions in Italy at a particularly crucial moment, as the country faces enormous pressure to grow its economy to stave off the continent's debt crisis. Italy's economic growth has been stagnant for at least a decade, and the national economy is forecast to contract by 1.2 percent this year.

The area encompassing the cities of Modena, Mantua and Bologna is prized for its super car production, churning out Ferraris, Maseratis and Lamborghinis; its world-famous Parmesan cheese, and less well-known but critical to the economy: machinery companies.

Like the May 20 quake, many of the dead in Tuesday's temblor were workers inside huge warehouses, many of them prefabricated, that house factories. Inspectors have been determining which are safe to re-enter, but economic pressure has sped up renewed production — perhaps prematurely.

Seven people were killed in the May 20 quake. In both, the dead were largely and disproportionately workers killed by collapsing factories and warehouses.

Co-workers of Mohamed Azeris, a Moroccan immigrant and father of two who died in the just-reopened factory, claim he was forced back to work as a shift supervisor or faced losing his job. A local union representative had demanded an investigation.

"Another earthquake — unfortunately during the day — that means people were inside working, so I think that an investigation will need to be opened here to check who cleared as safe these companies to understand who's responsible for this," Erminio Veronesi told The Associated Press.

At another factory closer to the epicenter in in the city of Medolla, rescue crews searched for three workers who did not turn up at roll call after the quake and were presumed dead.

Premier Mario Monti, tapped to steer the country from financial ruin in November, pledged that the government would quickly provide help to the area "that is so special, so important and so productive for Italy."

The Coldiretti farm lobby said damage to the agricultural industry, including Parmesan makers whose aging wheels of cheese already suffered in the first quake, had risen to euro500 million ($626 million) with the second hit. The Modena Chamber of Commerce estimated that the first quake alone had cost businesses euro1.5 million, with no fresh estimates immediately available.

Ferrari, Maserati and Lamborghini, all centered around Modena, reported no damage, and said workers were evacuated and then allowed to go home to check on their homes and families. Lamborghini planned to keep production halted on Wednesday.

The quake was felt from Piedmont in northwestern Italy to Venice in the northeast and as far north as Austria. Dozens of aftershocks hit the area, some registering more than 5.0 in magnitude.

The temblor terrified many of the thousands of people who have been living in tents or cars since the May 20 quake and created a whole new wave of homeless.

"I was shaving and I ran out very fast, half dressed," a resident of Sant'Agostino, one of the towns devastated in the quake earlier this month, told AP Television News.

Tuesday's quake struck just after 9 a.m. with an epicenter 40 kilometers (25 miles) northwest of Bologna, according to the U.S. Geological Survey — just several kilometers (miles) away from where the 6.0-magnitude quake that killed seven people on May 20 was centered.

In the town of Mirandola, near the epicenter, the church of San Francesco crumbled, leaving only its facade standing. The main cathedral also collapsed. Sant'Agostino's town hall, so damaged in the May 20 quake that it looked as if it had been bombed, virtually fell apart when the latest deadly temblor struck.

Labor Minister Elsa Fornero suggested the destruction to buildings was out of proportion, considering the magnitude of the quake. "It is natural that the earth shakes. But it is not natural that buildings collapse," Fornero said told lawmakers in Parliament's lower Chamber of Deputies.

The May 20 quake was described by Italian emergency officials as the worst to hit the region since the 1300s. In addition to the deaths, it knocked down a clock tower and other centuries-old buildings. Its epicenter was about 35 kilometers (22 miles) north of Bologna.

It's not clear why two large quakes have occurred this month, said Jessica Turner, a geophysicist with the U.S. Geological Survey in Golden, Colo. The basic driver of the activity is the same kind of geological shifting that produced the Alps, she said.

Prior to May 20, the last earthquake in the region with magnitude that large was in 1501.

Residents had just been taking tentative steps toward resuming normal life when the second quake struck. In Sant'Agostino, a daycare center had just reopened. In the town of Concordia, the mayor had scheduled a town meeting Tuesday evening to discuss the aftermath of the first quake. Instead, Mayor Carlo Marchini confirmed the death of one person struck by falling debris in the town's historic center.

Italy's soccer match against Luxembourg, a warm-up for the Euro 2012 championships, was canceled. The game had been scheduled to be played Tuesday in Parma, just 60 kilometers (40 miles) west of the quake.