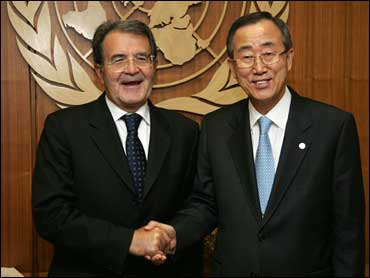 Italy's premier began his fight Tuesday at the United Nations for a worldwide moratorium on the death penalty, a move that is expected to face opposition from the United States and other countries that still allow capital punishment, including Iran and China.

Premier Romano Prodi hopes to generate enough consensus to pass a General Assembly resolution calling for a moratorium, and the topic was expected to feature prominently in his address to the U.N. General Assembly on Tuesday evening.

"Today Italy begins its battle for a moratorium ... that we intend to win" Prodi said in comments carried by the ANSA news agency and confirmed by his office.

The premier said the hard work "begins today" but warned of hurdles ahead because "there are many important countries that still apply (the death penalty), like the United States and China."

U.N. officials said Monday that Prodi had met with U.N. Secretary-General Ban Ki-moon and discussed the moratorium, among other topics. A diplomatic source who is traveling with Prodi said Ban supports the initiative.

A U.N. spokesman, Brenden Varma, said Ban's views on the death penalty have not changed since January, when he stated his belief that life was precious and must be protected.

"International law affirms these values. I recognize the growing trend in international law and in national practice towards a phasing out of the death penalty," Ban said at the time. "I encourage that trend."

The Italian diplomatic source, who requested anonymity because he is authorized to talk to the press but not to be quoted by name, said it was not yet clear when a moratorium on the death penalty might be voted on, but said it would likely happen in late October or November. Prodi said Tuesday he hoped for a vote in November at the latest.

The resolution would need two thirds of the votes in the 192-member U.N. General Assembly to pass.

Italy began a diplomatic push against the death penalty in the wake of the Dec. 30 execution in Iraq of Saddam Hussein. Past lobbying by Italy for U.N. action to strike down the death penalty has been unsuccessful.

The European Union is likely to back Italy's call, but countries that still have executions, including the United States, Iran, Saudi Arabia and China are expected to oppose it.

Meanwhile, the U.S. Supreme Court on Tuesday agreed to consider the constitutionality of lethal injections in the case of two death row inmates.

The United States has executed at least 40 people this year and 1,098 people since the U.S. Supreme Court allowed capital punishment to resume in 1976, according to the Death Penalty Information Center, a Washington organization that looks at problems with the capital punishment system. And Texas, home to President Bush and the country's most active death penalty state, last month executed its 400th inmate since 1976.

Richard A. Grenell, spokesman for the U.S. Mission to the United Nations, declined to speculate on how the United States would vote on such a resolution.

However, he noted that "we strongly feel that the use of the death penalty in the United States is a decision best left to democratically elected governments at the federal and state levels."

Italy is a firm opponent of capital punishment. Rome's Colosseum, once the arena for deadly gladiator combat and executions, has become a symbol of the country's stance. Since 1999, it has been bathed in golden light every time a death sentence is commuted somewhere in the world or a country abolishes capital punishment.

The death penalty center's executive director, Richard Dieter, said a U.N. resolution calling for a moratorium would be welcome information that would offer new food for thought, though it would be unlikely to have a direct effect on executions in the United States, even if it passes.

"This is an important piece of information. It's not a few outspoken countries against the death penalty, it's a majority of countries," Dieter said. "It's one small factor that is a part of a calculus used when Americans say, 'Is it worth it?"'