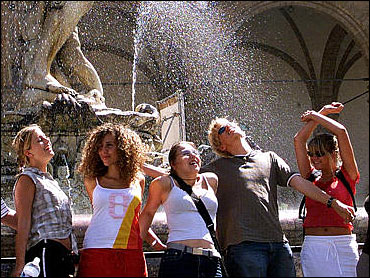 Visitors can no longer use the splendid entrance at Rome's Basilica of St. Mary Major — it's sealed off because drunks and lovers had made it a hangout.

In Florence, Catholic officials complain that church steps are turning into latrines at night. Police in Venice plan to fine tourists for leaving lunch leftovers in the square outside St. Mark's Basilica.

Italy's churches draw millions of visitors each year, and anger is mounting over how some mistreat the nation's religious heritage.

Monsignor Timothy Verdon, on the staff at Florence's Duomo, or cathedral, held a news conference this week to denounce the lack of respect shown to that magnificent church.

"The millions of Italians and foreigners who come every year to admire the architecture and art and — many of them also to pray — must run through a kind of obstacle course," Verdon said.

He decried the dozens of souvenir vendors outside the cathedral's exit and the messy trash cans in the piazza, "which are already spilling over by midday."

Even worse, Verdon added, officials at several churches in Florence, a city renowned for grace and beauty, complain that the areas around their churches have been transformed into "open toilets."

"It's not the Florence you used to see, the drawing room of Europe," lamented Monsignor Angelo Livi, pastor at San Lorenzo church, the burial place of members of the princely Medici family and one of the churches cited in the cathedral's appeal for help.

"There's always more and more bums and tourists sleeping outside," Livi said in a telephone interview Wednesday. "The tourists sit on the steps and leave all the crumbs."

Buying a sandwich in a grocery store for lunch on a church's cool marble steps is a popular alternative to Italy's pricey trattorias and cafes.

Responding to the appeal for city authorities to clean up the mess around churches, Mayor Leonardo Domenici said Wednesday that Florence is no worse off than anywhere else in Italy.

Catholic officials in other cities have taken their own measures.

At St. Mary Major in central Rome, church authorities closed one of the basilica's two entrances a few years ago.

"We used to get all the drunks. There were even people making love," said Sandro Necciari, who works in the basilica's administration.

"Above all it was a rubbish problem. In the morning it was chaos," he said.

Rome used to "put a policeman there every now and then, but it's no good," Necciari added. "This is a Roman problem and think how many policemen you would need to guard all the monuments in Rome."

Italy's municipal and national budgets are chronically short of funds to care for the country's wealth of art and architecture.

Still, civil authorities in Venice plan to crack down outside the 9th century St. Mark's Basilica. They are posting signs warning that "people who picnic in the square and leave litter behind" will risk fines equivalent to $56.

"It's a precious place for all, and all have to preserve its beauty," said Federica Durigan, a city tourism official.

One place that has escaped tourist depredations is St. Peter's Basilica at the Vatican.

St. Peter's Square sits in Vatican territory, and its spotless cobblestones reflect that special status. Visitors aren't allowed to sit down to eat in the square itself, although they generally are left in peace while eating sandwiches in the shade of Bernini's colonnade embracing the square.