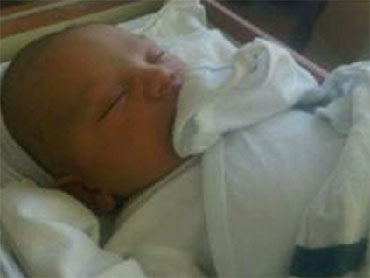 Hill said, "We are thrilled with the new addition to our family and so pleased he arrived at 6:26 a.m. -- just in time for 'The Early Show!'"

Sawyer's big brother, Weston, is excited about the new arrival, although he wishes his parents had named the baby "Nemo."

The "Early Show" anchors celebrated Sawyer's arrival on the broadcast Wednesday, giving him a time capsule -- complete with a copy of the day's New York Times -- for him to open when he's older.

To see the first released photos of Hill's baby, click on the video below.