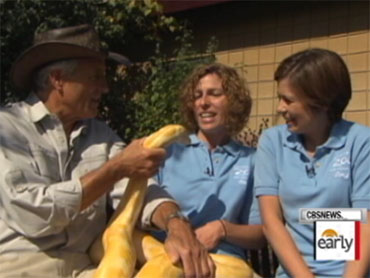 Everyone has a dream job. When "The Early Show" asked viewers and readers to tell us about their dream jobs, we got a tremendous response. So we decided to make some of those dreams come true.

"Early Show" co-anchor Maggie Rodriguez got to do that for an accountant.

Angie Prandini, of North Carolina, spends most of her time at her desk zat home, crunching numbers.

But from an early age, she's had a passion for all things fuzzy and furry.

So, when she told "The Early Show" it was her dream to work as an assistant to animal expert, and "Early Show" friend Jack Hanna was happy to help.

As the director emeritus of the Columbus Zoo, Hanna is responsible for the well-being of more than 8,000 animals. The assistants -- or keepers -- help with the care of each and every one.

All Prandini could say was "wow."

Rodriguez said to Hanna, "Pretty much everybody at the zoo is your assistant. How crucial is what they do every day?"

At one point in their day, Rodriguez asked Prandini, "Could you see yourself coming to work at the zoo?"

Prandini replied, "I think I could."

But how did she handle a face-to-face encounter with Kulinda, a black rhino, with less than minty breath?

While brushing the animal's enormous teeth, Prandini said, "It's actually kind of cool, get you all cleaned in there."

But meeting the zoo's famous koala bear was a real treat until Prandini was asked to do another not-so-glamorous task: weigh koala droppings.

Hanna said, "I'm sorry. Go in there see if you can find some -- don't bypass the big ones -- put your hand in there. Let me hold your stuff for you, you get in there and dig around."

While washing their hands after the droppings handling, Rodriguez said, "So Angie, I want to get your impressions of the day you just touched and weighed koala poop. What was that like?"

Rodriguez asked, "You're taking it as a privilege?"

Prandini said, "It's definitely a privilege."

The Columbus Zoo is one of the leading zoos in the country, competition is fierce to become one of the 1,400 employees.

During their day at the zoo, Prandini and Rodriguez even got to pet a wild cheetah.

Hanna said, "The whole key is respect. These are not tame animals, they're wild animals."

While cheetahs posed no problem for Prandini, meeting Mango, the zoo's Burmese python, was a big challenge. Prandini had a lifelong fear of snakes, but to be Hanna's assistant, you have to work with every kind.

Hanna and Rodriguez joked to Prandini as she held the snake, "You don't mind if I leave do ya?"

Rodriguez said, "I got to help you with that."

Hanna added, "Don't get all wrapped up in your work OK!"

Prandini said, "Thanks guys, real great. OK, are we done?"

Rodriguez reported Hanna makes work fun, but he still runs a tight ship. Between feeding lorikeets, brushing rhino teeth, and making penguin food, it was a full day of work.

Rodriguez added on "The Early Show" Wednesday, "Here's what's really cool about this dream job -- it could actually become reality. (Angie) says her husband travels all the time to Ohio and Jack said, you know, he really would make something happen if she was serious about it."